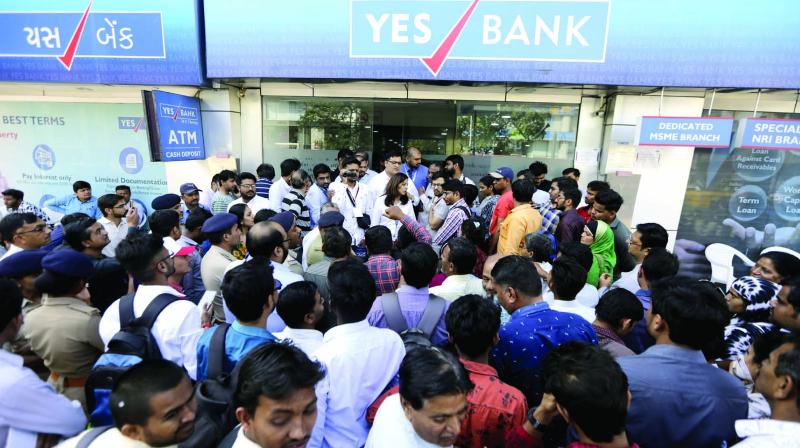 People wait for cash withdrawals outside a Yes Bank branch in Ahmedabad on Friday. (Photo: AP)

The Reserve Bank of India’s decision to supersede the board of cash-strapped Yes Bank, within a few months of the PMC Bank crash, and impose a month-long withdrawal cap brought back the banking sector’s woes into focus. The fact that the RBI was forced to intervene to protect a fairly large bank about 16 years after it rescued crashing Global Trust Bank by finding a suitor in Oriental Bank of Commerce shows the rut in the banking sector in the form of bad debts.

While the move is aimed at saving Yes Bank, one of the youngest and fastest growing private banks a few years ago, it could well impact public confidence and investor confidence in private lenders. This has jolted Indian equity markets, already reeling due to fears of a possible coronavirus pandemic. Though there were reports that State Bank of India and LIC may acquire a 49 per cent stake in Yes Bank at `2 per share, panic-stricken investors dumped Yes Bank shares after the market opened on Friday. The share value more than halved on Friday, after recovering from an 85 per cent fall. The biggest losers in this fiasco are retail investors who steadily increased their stake in the bank to 48 per cent. The Sensex and Nifty lost over two per cent, eroding lakhs of crores of rupees of investors’ wealth.

The RBI’s sudden regulatory action on Yes Bank leaves many questions unanswered. The deteriorating financial health of the bank was known for over four years, and the situation worsened in the past year. While the bank’s management tried to get suitors for bailing it out, none of the deals fructified for different reasons. But the RBI was a mute spectator, acting only when there seemed no hope for a deal.

This late-night regulatory action appears to show that the Centre and the RBI have failed to find a solution to humongous non-performing assets worth `9.5 lakh crores — a figure that doesn’t take into account restructured MSME loans and defaults in farm and Mudra loans. Though the Narendra Modi government tried to address this issue in its first term, it finally seems to have decided to let the banks find their own way out of this mess, causing a temporary freeze in lending by many financial institutions.

Instead of further dithering, the government should consider forming a specialised entity to refinance all bad loans from banks and NBFCs through long-term loans, with an initial moratorium on repayment. The government could source funds for this special entity either from pension funds or through a facility like the US Federal Reserve’s Quantitative Easing. This one-time one-off facility would allow banks to focus their attention on their business rather than spending time in the courts or in boardrooms of defaulting clients. If new defaults crop up later, the bankruptcy code can tackle it efficiently. For now, it's time for an Indian version of Quantitative Easing.

Farrukh Dhondy | The empire strikes back! Secret plan is unveiled