While Indians were lighting lamps, China registered an uptick in Covid-19 positive cases, after a period of declining growth 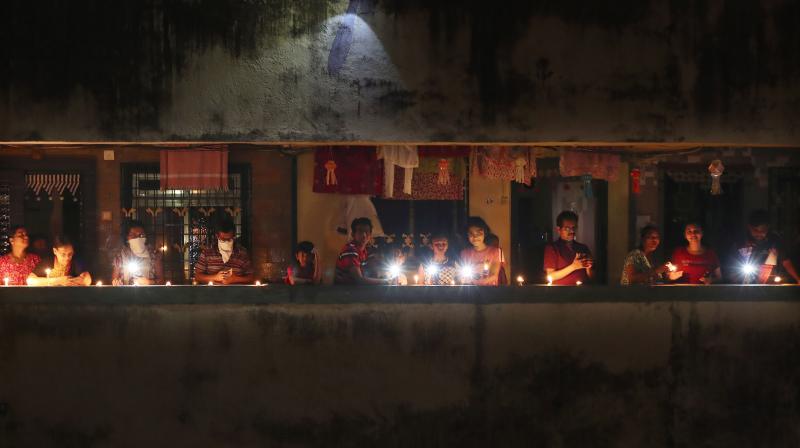 People light candles and switch on torches as instructed by prime minister Narendra Modi at 9 pm on Sunday, April 5, 2020 to mark the country's fight against the Covid-19 pandemic. (AP)

On the night that prime minister Narendra Modi used the global Covid-19 pandemic to teach another lesson in obedience training to a comatose Indian middle-class, India’s positive cases of the coronavirus crossed the 4,000 mark and the death count jumped by 32 — the highest single-day increase so far.

Modi had asked citizens to turn off their lights and light lamps (or use the torches on their mobile phones) for nine minutes starting at 9 pm, and the sheep complied, without wondering what switching off the lights had to do with social distancing or other population-wide measures adopted to contain the spread of the coronavirus. There was no power shortage; this was just another maha-aarti ordered by the boss to show everyone who was boss.

Promptly came, the morning after, a list from the resident doctors association of Safdarjung Hospital in the heart of New Delhi, asking the public for donations so that they could buy 50,000 PPEs (hazmat suits), 50,000 N-95 masks, three lakh triple-layer masks, and 10,000 500-ml bottles of hand sanitiser.

The government itself estimates India will need 1.5 crore PPEs, 2.7 crore N-95 masks, 16 lakh diagnostic kits amd 50,000 ventilators in the next two months. One supposes that lighting a lamp is cheaper than donating to those in the trenches against the coronavirus.

It is clear that the crisis is not abating, whatever the crackpot astrologers may tell us about the significance of the dates that have passed. For example, a Mumbai hospital has become a containment area after two-dozen nurses and three doctors tested positive.

It seems unlikely that the lockdown will be lifted on April 15, despite the plans being made by airlines and railways. The government may float news stories that 80 per cent of the cases are in 62 districts — but as the example of the Tablighi Jamaat showed us, we have to worry just as much for the remaining 20 per cent. And Indians should note that while they were lighting lamps, China registered an uptick in positive cases, after a period of declining Covid-19 case growth. This microbe is dangerous and unpredictable, which makes this mini-Diwali ordered by the PM not just premature but also dangerously shortsighted.

People reported that the nine minutes were also marked by fireworks. A BJP leader from UP fired her gun in the air. One absurdity trumps the next. Blind devotion to the Great Leader, processions, banging pots and pans, and lighting lamps — a BJP MLA led a crowd in chanting “China virus go back” — these are the lobotomised middle-class’ answer to a pandemic.

Modi is unlikely to inculcate scientific temper in Indians, for that would be too Nehruvian a thing to do. However, we urge him to give up announcing these self-serving image-building exercises. Instead, his government ought to be giving people not a false assurance that their lives will resume at a time around the corner, but preparing them to grit their teeth for a long haul.