Opinion   Edit  07 May 2017  A case that justifies use of death penalty
Opinion, Edit

A case that justifies use of death penalty

One of the six accused committed suicide in jail and another was a teenager who has served out his three-year jail term. 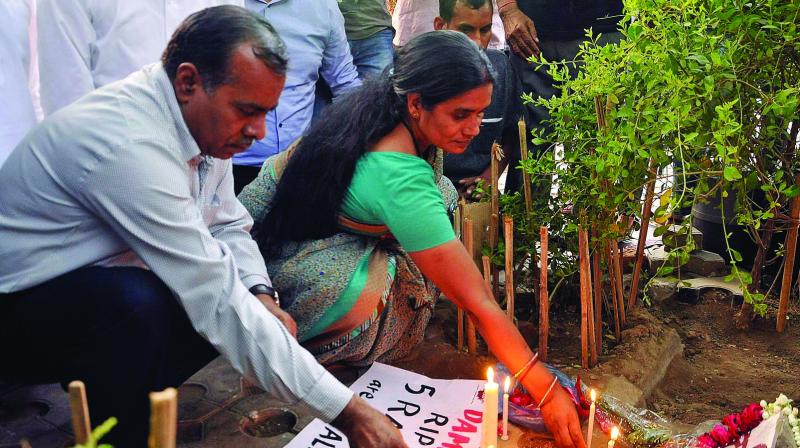 The Supreme Court’s confirmation of the death sentence for four of the six accused in the Nirbhaya gangrape case on Friday has been justly hailed. The hair-raising crime that had taken place on December 16, 2012 had jolted the nation and led to the law on rape being changed. The young paramedical student who was brutally assaulted had later succumbed to her very serious injuries.

One of the six accused committed suicide in jail and another was a teenager who has served out his three-year jail term, the maximum a juvenile can be given under the law prevailing at the time the crime occurred. Under the changes made in the law due to pressure exerted by the Nirbhaya case, in comparable crimes the gravity of the incident will take precedence over juvenility in future.

In the Nirbhaya case, the trial was for rape-cum-murder, that makes it technically different from the Bilkis Bano case of 2002 in which, just a day prior, the Bombay high court had awarded life sentences to the accused, rejecting the prosecution’s demand for the death sentence in the case of three of them, though some members of Ms Bano’s family were killed in that gruesome incident. The trial in the Gujarat communal violence matter pertained to gangrape alone, not that this in any way reduces the sordid and depraved nature of the incident.

Many — including powerful proponents of the notion of gender justice — who express solidarity with Nirbhaya, and others who are made victims of sexual violence in a male-dominated society, are opposed to the death sentence upheld by the Supreme Court. Fundamentally, it appears, they are in principle against the death sentence for any crime, including murder. To say that the death penalty’s existence has proved to be no deterrence is just a layer to the main argument.

True, the death penalty hasn’t been very effective as deterrence. Also, since the Nirbhaya case, incidents of rape have not reduced in spite of the law being widened (some of that is due to expanded reporting). Can these be arguments for not awarding the death sentence in a deserving case as long as this penalty is the maximum punishment in the statute book? The way jurisprudence has evolved, in the hierarchy of crimes, certain crimes attract the maximum sentence available, and it cannot be otherwise.

The defence counsel in the Nirbhaya case has said he would seek a review of the death sentence since “only He who gives life can take away life”. This is a precept in some religions. But what should be the basis of arriving at an appropriate sentence in a case like Nirbhaya? Arguments against the death penalty can logically also be extended against a life sentence.