The impact of close economic and trade cooperation has had an extremely beneficial political fallout. 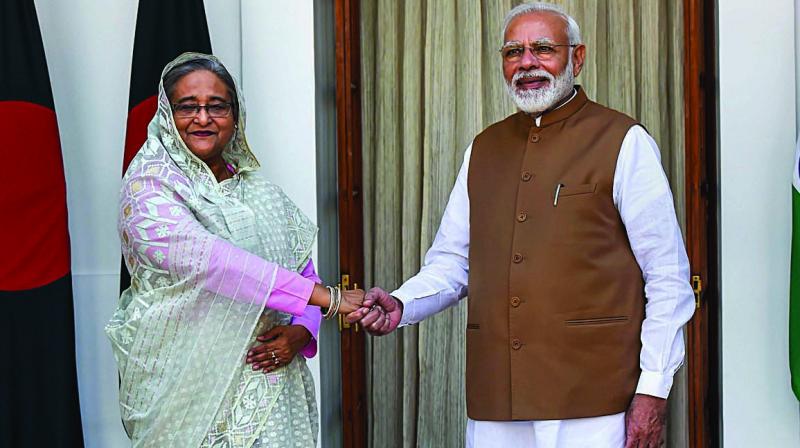 It is a matter of satisfaction that the talks between Prime Minister Narendra Modi and his Bangladesh counterpart Sheikh Hasina were held in an “atmosphere of great cordiality and warmth”, to quote from the joint statement issued after the meeting last Saturday.

Since former Prime Minister Manmohan Singh laid the foundations of the new-era relationship with Bangladesh after the term of then Prime Minister Khaleda Zia, which enjoyed strong support of the religious right in the neighbouring country, our bilateral ties have gone from strength to strength, and are today a model for all of South Asia.

Crucially, this rapid progression owes to the broad secular outlook of the present ruling party in Bangladesh, and especially its Prime Minister. Importantly, the rapid economic growth Bangladesh has enjoyed — growing 188 per cent since 2009 and in recent years striding ahead at about eight per cent annually — has been a perfect fit for India.

The fruits of growing connectivity — rail and road, mutual market access and Indian investments — although still quite limited, have created a positive spirit on both sides. Bangladesh is also the biggest recipient of Indian assistance, totalling around $3 billion.

The impact of close economic and trade cooperation has had an extremely beneficial political fallout. Dhaka has been sensitive to New Delhi’s concerns on terrorism. Among the seven agreements signed during Sheikh Hasina’s visit was one for the erection of a maritime surveillance platform by India in Bangladesh. India will also open a line of credit for $500 million for defence. This is an important step in the security relationship.

The stronger the economic and broad social and political relationship grows, hopefully in the not too distant future, bilateral ties will become impervious to change of governments in either country.

Mutual accommodation is already producing results. Dhaka is not being obstreperous on the NRC question, which is agitating not just Assam but other Indian states too. The visiting PM has taken at face value Mr Modi’s explanation that NRC is an “ongoing process” mandated by the Supreme Court and need not raise concerns in Dhaka. This is a sensitive matter. For positive vibes to gain momentum, it is imperative that India take no steps that even remotely look like the deporting of so-called illegal immigrants that Union home minister Amit Shah had threatened.

In Parliament, the BJP had blocked the Land Boundary Agreement with Dhaka which was ready for signature in 2011 under the previous Manmohan Singh government. When the saffron party came to power in 2014, it withdrew its objections and the agreement was concluded. This has helped develop an all-party consensus in India on furthering close ties with Bangladesh. Similarly, we hope that the difficulties on sharing Teesta waters will also be removed. The Trinamool Congress had strenuously opposed it earlier, embarrassing Dr Singh greatly in 2011. While the BJP seeks to dislodge Mamata Banerjee in Kolkata, it should keep national interest in view and not engage in competitive populism with the TMC in blocking the Teesta accord.