The prayers of those seeking instant justice were swiftly answered. 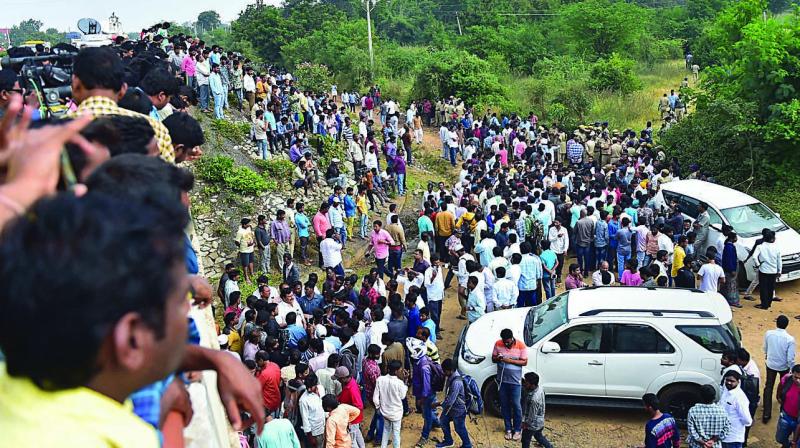 The gangrape-murder of a young veterinarian in Hyderabad earlier this week had stunned and angered India. Women becoming prey in public spaces was becoming nauseatingly frequent in India. 2012’s ghastly Nirbhaya case is still fresh in everyone’s minds. Seven years on, there is no justice.

This is due to the deplorable working of the judicial system. Instead of working to repair this fundamental aspect of our democracy, even MPs were seized by bloodlust and urged people to take the law into their own hands after the gruesome Hyderabad incident. Such a “remedy” will destroy the State and pulverise society.

The prayers of those seeking instant justice were swiftly answered. At around 3 am Friday, Hyderabad’s policemen seem to have shot dead the four accused in cold blood. The official version claims the accused were taken to the scene of the crime to help reconstruct their foul deed, but they tried to snatch the policemen’s weapons and flee. An “encounter” ensued. The four alleged rapists were killed.

The “encounter” story is unlikely to withstand scrutiny. It seems quite plain that the accused were shot dead in cold blood in order to appease public opinion. Demonstrations in Hyderabad showed people were very angry after the gangrape-murder. The state government appeared inefficient and helpless. Telangana CM KCR came in for withering criticism when he attended a wedding but failed to meet the family of the young victim. He may now breathe easy.

The people have largely approved of the cold-blooded “encounter”. They showered flower petals on the police. KCR has apparently regained his lost political capital. But in giving their approbation to the cold-blooded murder, the people may have unwittingly taken the first step toward the end of the rule of law. If the police turn into terrorists and are entrusted with hand-delivering speedy justice, no one may be safe. Instead of improving and reforming the courts, we may as well wind up the legal system.

This is how the Taliban rendered justice. They dispensed with the idea of due process. They were initially applauded, just as the government and police have been in Hyderabad. Later, the people of Afghanistan figured that the Taliban and its police gave themselves the licence to commit crimes at will. A police state acts in favour of the strong and against the weak. It can make women disappear at will and there is no one to complain to.

Key BJP leaders who approve the disturbing recent “justice-delivery” in Hyderabad must know this can trigger demands for instant death (without trial) for an MLA of their party in Uttar Pradesh accused of rape, also a former Union minister of the party who ran an ashram, as well as men involved in the Kathua rape case. In Hyderabad, the KCR government appears to have acted in a way that can only lead downhill. Maneka Gandhi, a former minister in the Narendra Modi Cabinet, has said that Hyderabad has set a “dangerous” example. She is right.