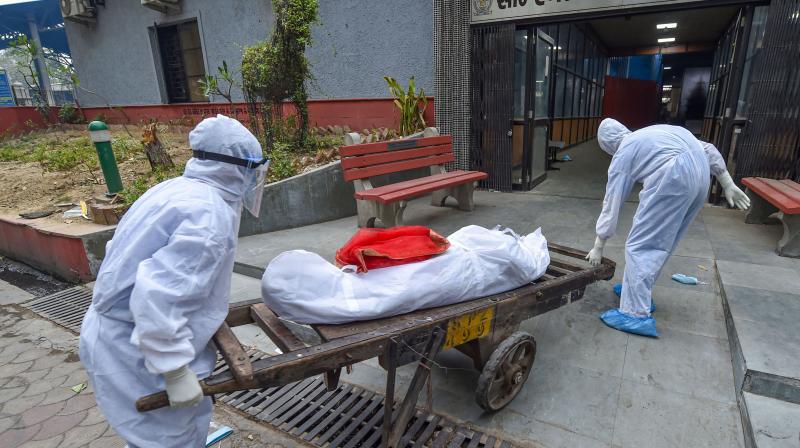 Most experts agree that the first such move, the national lockdown, indeed helped but the government did little to make use of the opportunity to prepare the nation for a successful engagement with the virus later on. PTI Photo

India seems to be taking a dangerous turn when it comes to the spread of pandemic Covid-19 with the number of infections being reported in a day crossing 10,000 on Saturday and the country moving up to the fifth position on the list of nations in terms of the number of infected people.

There are no immediate chances of the numbers going down what with the Union government allowing opening of more social and community spots including places of worship on June 8 as part of Unlock 1.0. There is no sign of a vaccine arriving and herd immunity is miles away; only a coordinated and comprehensive governmental intervention with focus on strict implementation of social distancing norms can save the situation.

Most experts agree that the first such move, the national lockdown, indeed helped but the government did little to make use of the opportunity to prepare the nation for a successful engagement with the virus later on. The manifold increase of infections from less than 500 when the lockdown was declared on March 24 to over 2.5 lakh now bears witness to this fact. Even the data on infectivity and reproduction number offers little solace.

With the situation getting worse, it’s time the Union government revisited its gameplan, if it indeed has one. It has come to the fore by now that about 70 per cent of the infections are concentrated in about 30 towns. Unfortunately, the list has the key centres that move Indian economy — Mumbai, Delhi, Ahmedabad, Pune, Indore, Jaipur, Chennai, etc. Another report says Mumbai, Delhi and Chennai together account for about half of the cases.

The government must form a hands-on strategy that can swiftly yield results and save cities from further harm. It must work with the states meeting its constitutional obligations and respecting the states’ rights while doing so. It must also realise that the states are stretched to the maximum in terms of human and financial resources and hence the strategy must include in it elements that can offer the states some relief on both the counts.

One of the notable failures till now has been in identifying the best and proven practices in India and abroad and implementing them at the spots which needed them. Experiments in states like Kerala and districts like Bhilwara in Rajasthan proved that a human-centric approach can work wonders.

They called for accounting for the safety of each and every person and building a safety wall around them. A proper contact tracing, screening, testing, quarantining and treatment regime was the single most important factor. A widespread awareness campaign to break the chain of virus spread was another.

It’s true that the nation has lost its early mover advantage as it whiled away the precious time the national lockdown provided but the key element — placing the individual citizen at the centre — can still work. The government must rework its approach in close coordination with the states, instead of leaving it all to the latter. And it cannot afford to wait anymore.