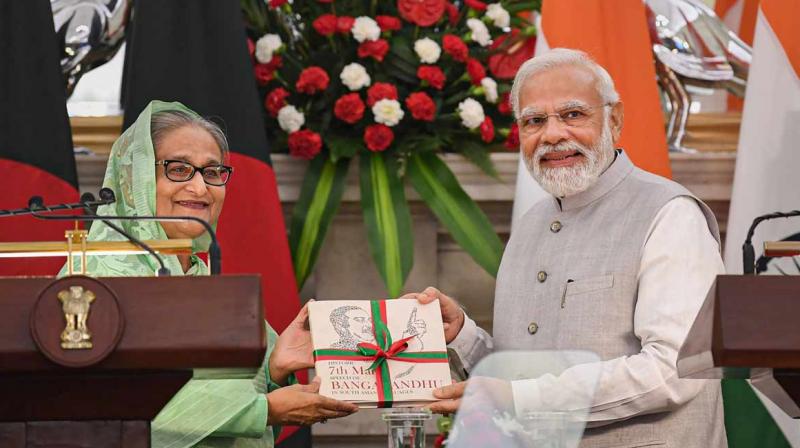 India-Bangladesh relations have been at a mutually satisfactory level with all-round trade picking up significantly, and connectivity and the energy sector gaining special salience in recent years. This was amply reflected in the four-day visit of Prime Minister Sheikh Hasina to India this week which concluded on a positive note with the signing of seven MoUs in a range of fields that would hopefully become actionable.

And yet, it is well understood in both countries that the present state of affairs derives in a very basic way from the current Bangladesh leader being in office.

The burgeoning bilateral relationship owes not a little to Sheikh Hasina’s stint as PM since 2009 and an earlier five-year term in the late nineties. The challenge is to create conditions that will permit the relationship to grow regardless of which party or leader is at the helm in either country.

Since its creation in 1971, our eastern neighbour has had a constituency rooted in Islamist ideas and pro-Pakistan and anti-India politics. These come to the fore from time to time. During the recent visit of the Bangladesh leader, attention was drawn by India at the highest level to extremism, terrorism and radicalism. Ms Hasina responded to this saying she would be especially sensitive to the treatment of the (Hindu) minority in her country.

This is a positive sign. But long-term efforts are called for by both sides that may lead to a bipartisan investment in Bangladesh in the India relationship. Within South Asia, no two countries have a more beneficial bilateral relationship than India and Bangladesh. To strengthen this will require taking kinetic and non-kinetic steps by Dhaka to check radicalism and extremism. On the other hand, New Delhi too will be called upon to expedite action on the question of river waters as there are as many as 54 rivers that flow through both countries.

The agreement on the sharing of Ganga waters was signed a quarter century ago. Agreement on Teesta waters has been hanging fire for long. In 2011, West Bengal chief minister Mamata Banerjee had scuttled a deal that was ready for signing. Her intransigent attitude on this matter for reasons of narrow state-level politics is robbing India of the opportunity to expand ties with Bangladesh in the bipartisan direction. River waters are a sensitive issue in Bangladesh since it is the lower riparian in the most prominent cases. Dealing with the question meaningfully can help neutralise constituencies in that country that strike up an anti-India stance. It is a positive sign that an interim agreement could be inked for the sharing of the Koshiyara river during Sheikh Hasina’s visit.

Reinforcing road and rail linkages, setting up a coal-fired thermal power plant by India, India’s active readiness to construct an oil pipeline linking the two countries, and Indian support in getting Bangladesh to get oil from Russia at concessional rates are effective steps to cement the bilateral ties. But the elephant in the room is China.

For about 15 years, China has made heavy investments in Bangladesh’s infrastructure, including its strategic ports, and the energy and defence sectors. If China’s relationship with Pakistan is designed as a strategy to contain India, in the east its policy has been to similarly entice Bangladesh.

Perhaps it is at this that Prime Minister Narendra Modi was hinting when he urged the visiting dignitary to jointly take on those who seek to “attack” the “mutual trust” between India and Bangladesh. The visiting leader did note that keeping each other’s strategic priorities in view was important. Being the bigger economy and regional power of substance, India has work on its hands in viewing the bilateral relationship in the wider context of regional geopolitics.