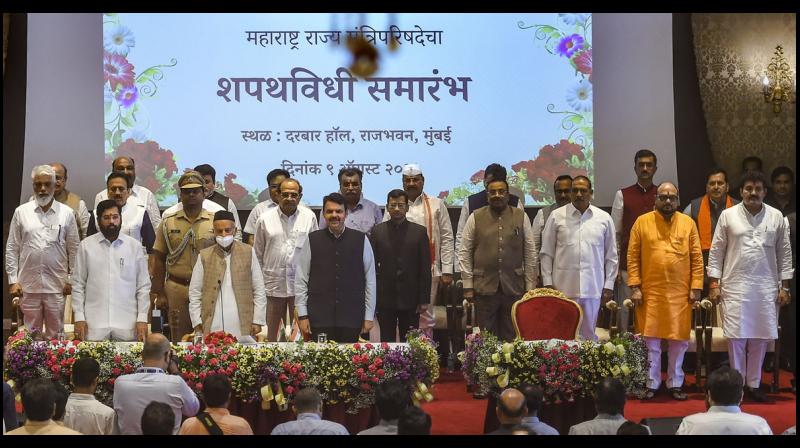 After running a government with a two-member Cabinet for 40 days, Maharashtra chief minister Eknath Shinde has finally inducted 18 more members in his council of ministers. As per the Article 164(1A) of the Constitution, members in a state’s council of ministers shall not exceed 15 per cent of the total number of members of the legislative Assembly. In Maharashtra’s case, the maximum number of ministers can be 43 including the chief minister. However, Mr Shinde has chosen to have a mini-Cabinet cobbled up to cover the bare minimum requirements and face the upcoming monsoon session of the state Assembly. The expansion was still riddled with controversies from the start.

There is not even symbolic representation of women in the Shinde Cabinet. Abdul Sattar, a strongman from Aurangabad, has been made minister despite the suspicion raised against him recently in connection with the alleged teacher eligibility test (TET) scam. The names of his two daughters have appeared in the list of candidates debarred by the Maharashtra State Council of Exams for their alleged involvement in the scam. Another minister, Sanjay Rathod, had to resign from the Uddhav Thackeray cabinet in February 2021 because of the BJP’s pressure after his name got embroiled in the TikTok star Pooja Chavan’s suicide case. Embarrassed by Rathod’s inclusion in the state Cabinet, BJP leader Chitra Wagh has said her fight against him will continue.

So why did Mr Shinde not appoint a full-fledged council of ministers and avoid keeping controversial figures out? The only plausible explanation is that the chief minister himself is not sure about his government’s legal, constitutional validity and its stability. The issue of whether Mr Shinde’s revolt against his party president Uddhav Thackeray should be treated as a defection or dissent is pending before the Supreme Court. It appears the Maharashtra chief minister and his new political gurus from the BJP are being overcautious because an unfavourable order by the SC will put them in an embarrassing situation. Therefore, it comes across as the temporary council of ministers of the tentative chief minister.