The installation of a grand statue of Netaji Subhas Bose in the nation’s capital, whom PM Modi called India’s first pradhan was long overdue 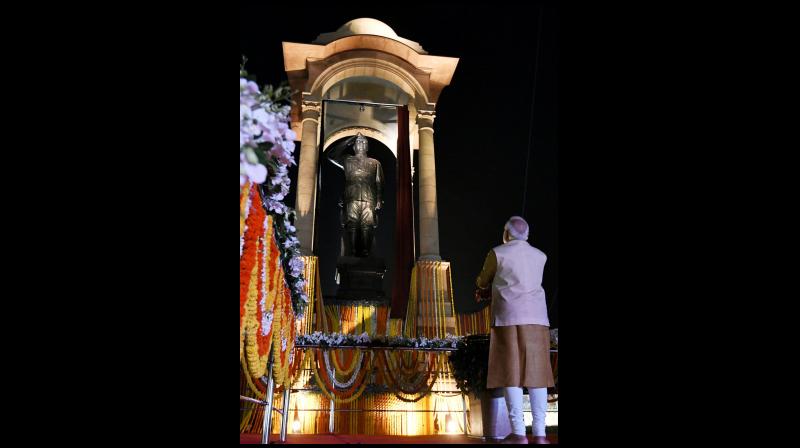 Prime Minister Modi spoke for millions of Indians when he hailed Bose but the country should not stop here. (Photo By Arrangement)

On a day when Queen Elizabeth II died, Prime Minister Narendra Modi also announced the death of colonial hangover in India, dedicating to the nation a statue of Netaji Subhas Chandra Bose at India Gate and renaming the Rajpath, the Kartavya Path.

Beyond the issue of renaming, the exercise announced the keenness and commitment of the BJP government to ensure, in a year when finally, the three highest posts are held by people born after Independence — the President, Vice-President and Prime Minister — that the British era legacy is done away with.

Mr Modi, from the start of his tenure as PM, has been systematically eliminating colonial legacies and symbols of power, instead wishing to see them as responsibilities to deliver greater good.

The installation of a grand statue of Netaji Subhas Bose in the nation’s capital, whom PM Modi called India’s first pradhan (de facto PM), was long overdue. A man who earned the sobriquet, “the prince amongst patriots”, from Mahatma Gandhi, a hero for an entire nation and an icon of global interest, Bose should not have been denied his due respect from Independent India for so long.

Prime Minister Modi spoke for millions of Indians when he hailed Bose but the country should not stop here. It should heed the demand of the family to try to bring back his ashes and build a grand museum to celebrate his life and achievements.

The BJP government should also heed its own philosophy of ending colonial legacies beyond symbols and leaders, and correct greater historical errors. Like the Indian police system, the CrPC, the All-India Services, in particular the IAS and bureaucracy, and laws like the sedition law. These are all colonial legacies too and we should bury them.