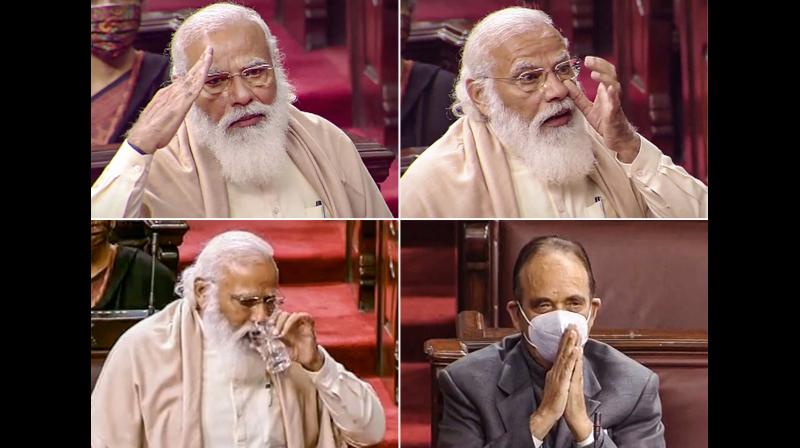 An extremely emotional speeches by the Prime Minister Narendra Modi and the Rajya Sabha Opposition Leader Ghulam Nabi Azad of the Congress, it augured well for a sense of dignity and decorum to be ushered back into India’s increasingly polarised polity. (Photo:PTI)

Not often in the recent past has Parliament been invaded by an outbreak of civility. But when it did, as in extremely emotional speeches by the Prime Minister Narendra Modi and the Rajya Sabha Opposition Leader Ghulam Nabi Azad of the Congress, it augured well for a sense of dignity and decorum to be ushered back into India’s increasingly polarised polity. Before a Prime Ministerial image makeover, Modi was stateliness personified, as in his opening speech as PM to both Houses of Parliament. Since then, in a fractured political scene, he has been seen more in confrontational mode, attacking opponents in India and when he goes abroad and in the House too when he mocked Sonia Gandhi and her son Rahul.

The spirit of give and take seemed to have evaporated in Parliament with many sessions lost to the “in the Well” attitude of the Opposition ranged against the intransigence of the Treasury benches when it came to lending an ear to diverse points of view. Civil debates on national issues have been few and far between but the ruling BJP is not the only party guilty of reducing Parliament into a non-functional laggard. This could change, much as it should, during the debate on the farmers’ stir and into the future when political parties on sharply divergent ideological paths can be expected to only drift further apart thanks to the compulsions of poll politics and the seeming need for harsh language at the hustings.

Clever interpretations of acronyms appear to be the current fad as politicians attack each other, which is why such fulsome praise of opponents, which Modi and Azad showered on each other on the eve of the former Kashmir CM retiring from Parliament, is to be seen as a breakthrough. Brushing aside cynical views of the use of words of praise being opportunistic and rare, we must wish that civility stays in Parliament where government and Opposition members meet most often and in debates that make the legislature one of the pillars of democracy. Politicians of all hues would do well to remember that cordiality costs nothing and that the nation and the Constitution always come first.