AA EDIT | No end in sight to Ukraine war 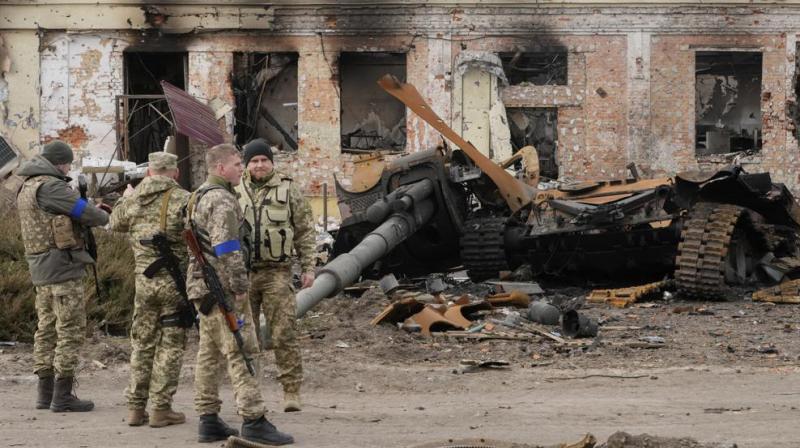 Putin was, somewhat fancifully, blaming NATO and the west for the war saying they were intending to invade Russian territory (read Crimea, annexed by Russia in 2014). (AP Image)

The good news is Vladimir Putin, contrary to western anticipation about him escalating the Ukraine “Special military operation” with a declaration of a full-scale war, did not make any major announcement at the Victory Day parade at Red Square in Moscow on Monday. The bad news, of course, is that the Ukraine war will not end any time soon.

The much-anticipated tone of greater aggression on a Memorial Day to honour the braves who fought in World War II was missing but the Russian supremo did seek to justify the action against Ukraine by saying his troops were “defending the motherland” against “neo-Nazis”. The muted jubilation around what would usually be a celebration of victory over Hitler’s Germany is, perhaps, owed to the military’s underperformance.

The failures in war on the fronts of intelligence, command and tactics and unexpected heavy losses in terms of personnel — 25,000 troops, including many Generals, according to Ukraine’s combative Zelenskyy — and thousands of infantry fighting vehicles and tanks, over 100 losses in flying m-achines and drones, besides nine ships, lead to the inescapable conclusion that this is not the feared Red Army of old that is fighting in Ukraine, be it in Mariupol, which is on the verge of being pummelled into submission, or the Donbas region in Russia’s recalibrated war objectives after Kyiv’s resistance.

Putin was, somewhat fancifully, blaming NATO and the west for the war saying they were intending to invade Russian territory (read Crimea, annexed by Russia in 2014). The point is there seems no way out now for him after having committed the invasion, which is tragic considering what damage it has wrought on the Ukrainian people and on Russia's fighting forces too.

A world, nowhere nearer getting Putin to stop the war against Ukraine and NATO, as he termed today, will continue to suffer the economic consequences while symbolic visits as that of the US first lady Jill Biden offers solace to those like the Ukrainians who are the real victims of an unalloyed evil called war.