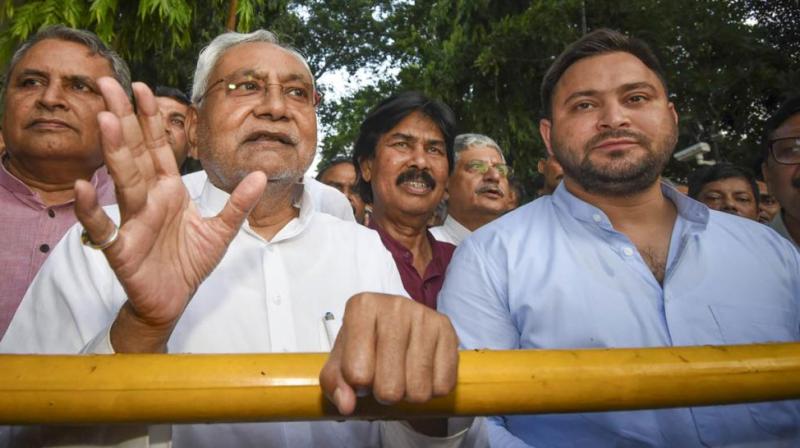 Bihar chief minister Nitish Kumar has left the BJP stranded in Bihar by getting out of the ruling alliance with BJP and opting to partner the well-grounded RJD, currently led by Lalu Prasad Yadav’s younger son Tejashwi Yadav. This has predictably fed the lore of Mr Kumar being a “flip-flop” politician. Between 2015 and 2017, he had been CM in alliance with RJD but dumped the RJD on that occasion to return to the BJP-led NDA. The reputation is not unjust. But there is a wider question here — is Mr Kumar alone who changes his mind? What about the BJP — in Bihar and in other states?

The tag is intended to denigrate the CM and it might in the eyes of the upper caste sections of the state, who have been with the BJP by and large well before the arrival of Narendra Modi on the scene eight years ago. But outside that elite social constellation, the label is unlikely to count. As for Bihar’s development under Mr Kumar, who has been in the saddle since 2005, there will be a question mark in spite of some progress in the otherwise discouraging record. In this period, his longest tenure has been in the company of the saffron party. The BJP thus cannot dodge the blemish.

Tuesday’s development in Bihar is likely to impact the political and social climate in Bihar. That’s not unexpected. But equally we may expect that the impact of this change will be felt in the next Lok Sabha election in 2024. The structural equation in the state — arising from the balance of the social and caste arithmetic — will get loaded against the BJP-NDA.

In 2019, the BJP-JD(U) combine had picked up all seats but one. On its own, the BJP’s primary constituency are the upper castes, and that could make things much harder for it. In Bihar, in the recent era, elections are hard to win outright for any party. That has led to frequent coalitions which are put in jeopardy from time to time on account of more proximate factors as well as more mundane issues like personality differences and difficulties in faction-management.

In the present instance, however, it is the BJP’s expansionist tendency, in evidence since Mr Modi’s second tenure as PM began, that has fed dissatisfaction with the party’s traditional allies. One by one, the Telugu Desam, Shiv Sena and Akali Dal parted company. And now it is the JD(U) in Bihar. In the 2020 Assembly election, it was evident that the late Ram Vilas Paswan’s callow but supremely ambitious son Chirag was fooled into setting up candidates chiefly to damage Mr Kumar’s JD(U) with the aim of dragging down the JD(U)’s tally in relation to the BJP’s. The game succeeded and the CM has been wary of his partner. After the recent developments in Maharashtra, suspicion was rife that an effort was on to break the JD(U)’s MLAs through lure or threats. This made the CM switch gears decisively leading to the August 9 developments, although he would have likely been planning months in advance.

A consolidation of the OBC forces is clear to see in Bihar alongside the coming together of the scattered elements of the former Lohia socialists — JD(U) and RJD — who are teaming up with the Congress and the entire Left spectrum — CPI(ML), CPI, CPI(M). Such a line-up on a statewide scale is new. That this is happening in a major Hindi- speaking state is something to watch. Will it spread? Will Mr Kumar angle to position himself for PM in 2024? These are at best speculative questions for now.