The code violation for coaching is hardly applied at such levels. 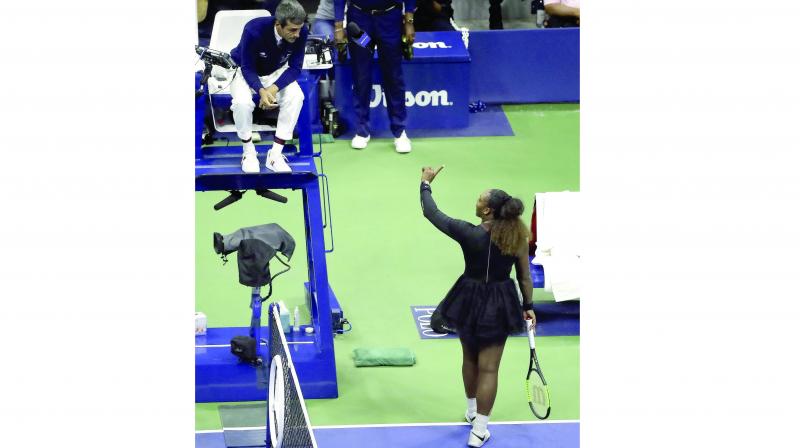 Serena Williams talks with chair umpire Carlos Ramos during the women’s final of the US Open tennis tournament in New York on Saturday. (Photo: AP)

In an instant, the world of women’s tennis exploded, accusations of sexism and recriminations flying as a chair umpire docked Serena Williams a game. The contest, till then dominated by Japan’s Naomi Osaka, descended into a war between a player trying to emulate Evonne Goolagong in winning a Grand Slam as a mother and the umpire, who seemed to apply disciplinary action in the final in an unprecedented manner. An emotional Serena may have been right to protest such officiousness, although her coach admitted he was trying to pass on instructions while the game was on, but Serena was oblivious of it. The code violation for coaching is hardly applied at such levels. It may not have helped that Serena later called the umpire “a liar and a thief”.

The result is a shot in the arm for Asian tennis as Osaka (a Japanese-American dual citizen) joins China’s Li Na as the only Asian winners of Grand Slams. Michael Chang was the product of a powerful US tennis academy in the 1980s when he won the French Open, and may not qualify strictly as an Asian. It’s in the women’s game that Asians have won three Grand Slams. It was gracious of Serena to finally acknowledge the achievement, and ask the crowd to stop booing Osaka. In seeking to separate the issues of a well-deserved victory and the contentious matter of umpires hogging the limelight on big occasions, Serena proved she can still be looked up to, without reservations, as an icon. Sporting acceptance of an official’s actions may seem appropriate at most times, but what happens if someone exceeds his authority in showmanship?