Nirmala Sitharaman has shown a flair for diplomacy naturally rooted in a transparent personality. 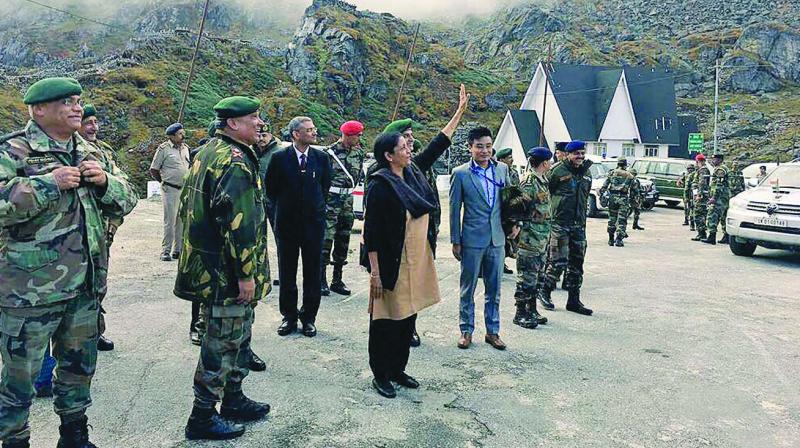 Defence minister Nirmala Sitharaman acknowledges a row of Chinese soldiers from across the fence who were taking pictures on her arrival at Nathu La. (Photo: PTI)

Defence minister Nirmala Sitharaman won hearts in India and China when, on a visit to Nathu La Pass in Sikkim last week, she folded her palms and taught Chinese soldiers “namaste”, explaining the meaning of that common Indian greeting. In turn, the PLA soldiers made her familiar with “Ni Hao”.

Gestures matter, and often mean more than reams of paper. It’s hard to think of another politician mingling with an adversary’s troops so spontaneously. In India, only the three Prime Ministers of the Nehru-Gandhi line, and perhaps Atal Behari Vajpayee, had it in their personalities to do anything similar.

All major Indian leaders appear boring, stuffy, and slaves of protocol and bureaucratic hand-holding — full of self-importance. With this simple gesture, Ms Sitharaman has transcended a wall, and risen in stature.

As BJP spokesperson, she used to come across as dour, sometimes as ardently predictable as one hewing to the party line, and even too sharp. As commerce minister, she showed sincerity and willingness to learn. In her new assignment, the Raksha Mantri has shown a flair for diplomacy naturally rooted in a transparent personality.

The boundary dispute with China may not be sorted out anytime soon. But the defence minister’s sincere gesture is like pouring cold water on whipping up hyper nationalism on both sides. That is important. It helps to seek areas of cooperation when the mistrust quotient is conspicuous, and squeezes out space for diplomacy.

People in both countries will be assured with this single action free from showiness or protocol that ordinary folk aren’t zombies and don’t grow horns.