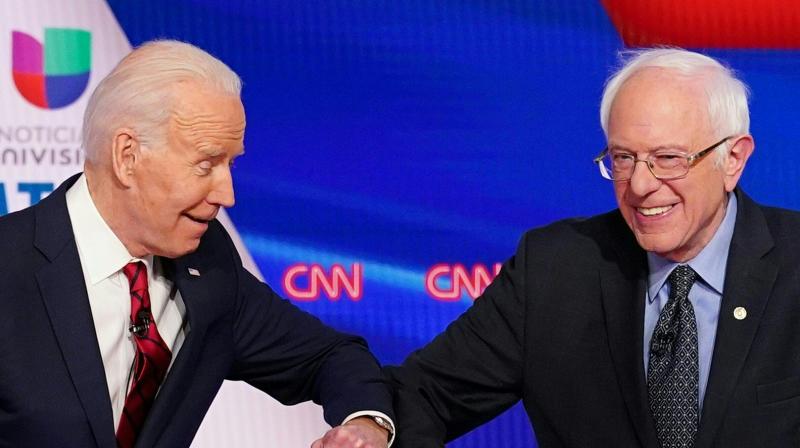 Joe Biden (left) and Bernie Sanders greet each other with a safe elbow bump before a Democratic Party presidential debate in Washington on March 15, 2020. Sanders has suspended his presidential campaign, clearing the way for rival Joe Biden to become the Democratic nominee to challenge Donald Trump in November. (AFP)

Bernie Sanders, the Democratic Socialist who championed the cause of the working class, has bowed out of the US presidential race, leaving only Joe Biden in the field to take on Donald Trump. If there is a third horse still running in the race, it is the invisible coronavirus; right now, it seems to be bolting away from the incumbent.

Sanders’ call for a political revolution was perhaps a cause too far for the USA though it did not seem so when he was the Democratic frontrunner, beginning with Iowa in the Democratic primaries and until the African Americans of South Carolina and Super Tuesday voters took the wind out of his sails.

The Republicans, who themselves may have been surprised by Trump's victory four years ago when Hillary Clinton was thought to be a shoo-in for the presidency, are now hoping that their candidate will not let his campaign sag further from the bluster and vitriol of his daily briefings.

Three new polls taken this week place Joe Biden handily in the lead. And Trump, who seems to think he can win by polarising the people at a time of grave national and global emergency, might be walking into a trap by ignoring his health experts and converting his corona battle into a presidential campaign.

Sanders’ call for a political revolution may be a non-starter, but in an extraordinary political career which he began as an independent, he brought several concepts to the fore in America such as universal healthcare and free college education, apart from lofty principles like social, racial and environmental justice.

Biden has much work to do if he is to capture the imagination of the youth as Sanders did and also win over the white working class, the Latinos and Indian Americans like Obama did. As a presidential candidate, Biden cannot bank on the cocky Trump losing support. As the virus rages across the USA, Biden is right now the frontrunner for the November polls.