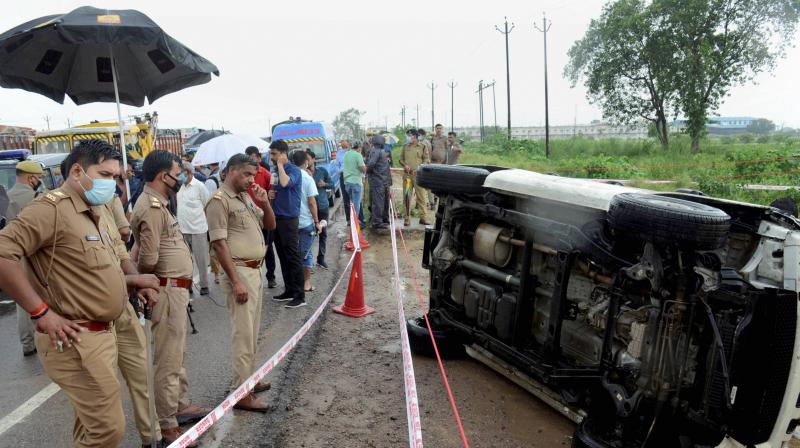 It is surreal that the fugitive criminal Vikas Dubey, who surrendered to the Madhya Pradesh police at Ujjain on Thursday, is then shot dead by the UP police on Friday morning — allegedly because he tried to snatch a gun and escape when the vehicle carrying him in a police convoy overturned at Kanpur (the only vehicle to do so).

Incidentally, the media, which was shadowing the convoy, was stopped 15 minutes before the incident. It is evident that the killing was nothing more than a brazen act of extra-judicial execution. It may not be shocking, but it is nothing if not condemnable.

Not many in UP would bat an eye at this gruesome shortcut of justice. Popular bloodlust for summary justice — as witnessed last December when the Telangana police was feted for shooting dead the four accused in a veterinarian's rape-murder on Hyderabad’s outskirts — continues to be fed by a political class that was complicit in Dubey’s crimes.

The extra-judicial execution cannot be justified on the grounds that Dubey’s men killed eight policemen. The Constitution gives everyone the right to a fair trial under Article 14, and Article 21 renders a fair trial as part of any individual’s guarantee of life and personal liberty.

An extra-judicial execution is unconstitutional. The absence of due process subverts not only the criminal justice system but democracy as well. It might sit well with a cynical populace impatient with the slow wheels of justice.

But it erodes the fabric of our democracy and society in ways that are much graver than an extra-judicial execution. One way is the manner of late in which the victims of riots are charged as the culprits, or in which dissenting students are deemed more anti-national than actual terrorists.

Vikas Dubey was a bad man. He had over 60 cases to his name including five in which he was directly accused of murder. In 2001, he reportedly killed a state minister — inside a police station. Yet he would not have thrived for so long had it not been for the police-criminal-politician nexus that has existed for longer than most Indians have been alive.

Kunda MLA Raghuraj Pratap Singh alias Raja Bhaiya, for instance, is one of many notorious politicians with a long criminal record. In UP the politician-criminal nexus is so widespread that any Netflix crime serial is by default set in UP.

In Dubey’s case, there was much talk of how he could have spilled the beans on the high and mighty — a former CM said if his vehicle had not toppled, the government would have — and it is speculated that five of the 12 named in the police deaths FIR were “encountered” because of such links.

Killing Dubey might have been an act of self-preservation by the UP police. In which case society must accept that Dubey’s extra-judicial execution is no panacea to UP’s (or India’s) law and order problems; it only preserves and perpetuates the dirty, lawless and corrupt status quo.