The grace of a champion was audible in Djokovic’s words, as much as the craft in his game 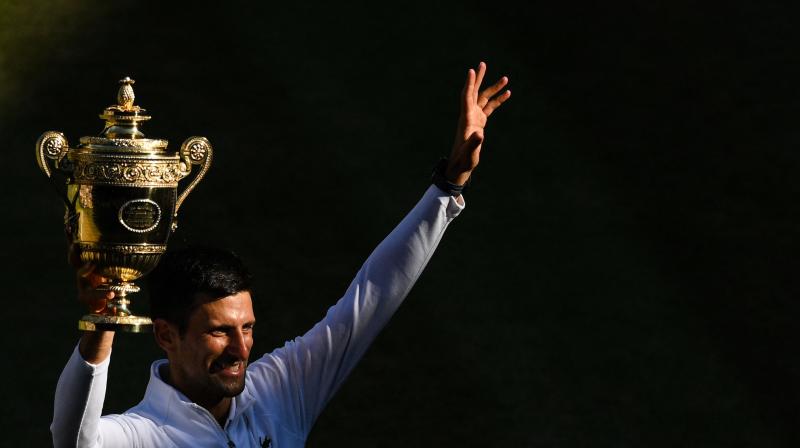 Serbia's Novak Djokovic poses with his trophy after defeating Australia's Nick Kyrgios during the men's singles final tennis match on the fourteenth day of the 2022 Wimbledon Championships at The All England Tennis Club in Wimbledon, southwest London, on July 10, 2022. (Photo: AFP)

There was poetic justice in Novak Djokovic stretching his reign on Wimbledon grass with a fourth win on the trot and a seventh title to join Pete Sampras (Roger Federer has won eight times). A Covid-stricken world had treated him poorly this year, with Australia deporting him and he was undercooked when losing to Rafael Nadal in the French Open.  The most fervent seeker of Grand Slams had his way in taking down tennis’ bad boy Nick Kyrgios at Wimbledon but only after he dug deep and brought out the craftiest moves from his playbook to win in four sets.

Before his temperamental opponent started imploding, the Serb had been up against a player who dominated him with his height, his presence and his innovative shots. Surely, there is a future for Kyrgios in the game if only he can tame the demons in his mind. On the opposite court, the implacable Djoker, who was not to be denied, was effusive in his praise of the Australian, commenting humorously on their ‘bromance’ too on the evening he won his 21st Grand Slam to pull one ahead of Roger Federer on the all-time greats list.

The grace of a champion was audible in Djokovic’s words, as much as the craft in his game. Given his ice-cool demeanour in the face of what was happening on the other side of the net, it did appear as if Djokovic is from a different planet even as Kyrgios invented ways to vent out his frustration, including in spitting out an X-rated epithet within earshot of the royal box.

The British royals may not have been amused but then they had not had their way in the women’s singles either as the Russia-born Elena Rybakina came through to take the trophy from Kate Middleton. There was just a suggestion of royal disdain as the winner did not get a handshake though her opponent Ons Jabeur of Tunisia, the first Arab and the first woman from Africa to get as far as the final at the All-England Club, received a warm one.

The Russians had been banned because of the Ukraine invasion but Elena had switched from Moscow to Kazhakstan whose tennis federation had adopted her in 2018. If the men’s game is still about the dominance of all-time greats in the three musketeers, the distaff side is throwing up vibrant young champions, which can’t be bad for the sport at all.