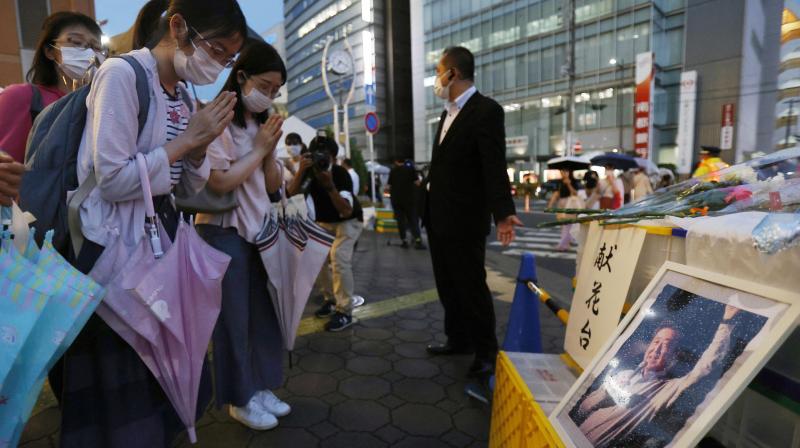 A photo of former Prime Minister Shinzo Abe is displayed on a makeshift memorial near the scene where Abe was fatally shot while delivering his speech to support a Liberal Democratic Party's candidate on Friday, in Nara, Saturday, July 9, 2022. (Photo: AP)

The assassination of former Japanese Prime Minister Shinzo Abe on July 8 shocked the world and tributes poured in from across the spectrum internationally. That showed the measure of his stature, although Japan has long ceded to China its place as the world’s second most powerful economy after the US, and militarily it has but a nascent presence on account of constitutional restrictions imposed on it after the Second World War.

Abe was his country’s youngest Prime Minister in 2006 and again led the government for eight years between 2012-20, remarkable for a nation where PMs change rapidly. The stability the late leader imparted to the political arena is a legacy that will doubtless endure. However, his record in government is a mixed one. Abe had resigned in 2020 citing health grounds, but his popularity was slipping on account of the handling of Covid and underwhelming economic outcomes.

The late leader continued to be a political force even after demitting office. His sad demise too saw an upswing in his party’s electoral fortunes with Japan’s governing party and its coalition partner scoring a sweeping victory in an upper house election. Abe’s Liberal Democratic Party (LDP) itself won more than half the seats with the sympathy factor kicking in.

There is a lesser and a greater reason why Abe is likely to be in the pantheon of Japan’s greats, and his antecedents as the scion of a famous political family (grandfather and granduncle PMs, and father foreign minister) have little to do with this. After Japan had been in a state of long economic slump, the late leader took recognisable steps to bring it out of the shallows through his ‘Abenomics”, although this was hardly an unqualified success. The greater cause for Abe’s domestic and foreign recognition, however, is his no less than grand effort — although not a wholly successful one — to give his country a wholly new personality, which somewhat shaped emerging strategic trends in a region crowded with powerful and threatening militaries — especially China and North Korea.

Article 9 of Japan’s post-war constitution, written by the US, had obliged Japan, a defeated power, for decades to renounce war and not have a military. This pacifism was reinterpreted by Abe to create a self-defence force through the backing of defence “guidelines” signed with America, although he was unable to change the constitution.

A year later in 2015, he followed this up with a “collective defence” legislation that permitted Japan to send its forces abroad in support of the US, should this be necessary. In the face of a militarily modernised China, and bellicose North Korea, this did cut ice at home.

In 2007, addressing India’s Parliament, Abe coined the concept of a “Broader Asia” and spoke of the “confluence of the two seas” — the Indian Ocean and the Pacific. This many regard as a precursor to the idea of the Indo-Pacific, and as paving the way for the Quad security dialogue forum.