This is not the first time, though, the Union government has deputed its teams to the states but the results were not all that encouraging 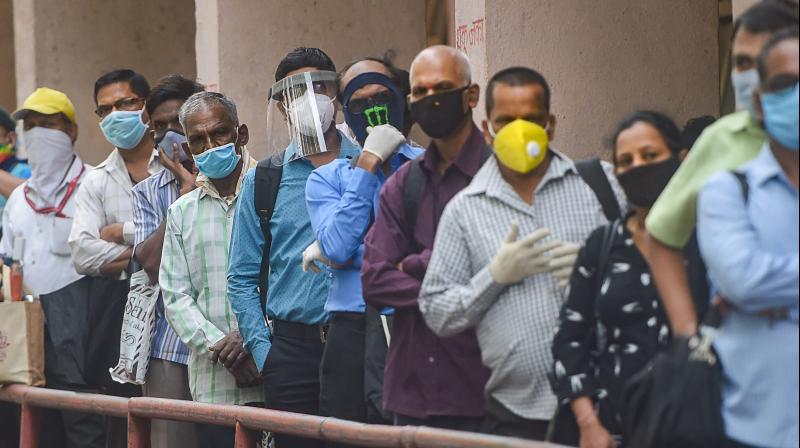 People wearing face masks stand in a queue as they wait at a bus stand, during the ongoing COVID-19 lockdown, in Mumbai. PTI Photo

The decision of the Union health ministry to send multi-disciplinary teams to over 60 Covid hotspots in 14 states and Union territories to provide technical and administrative support for the management of the coronavirus spread is a welcome move.

The teams will help the states address pressing issues such as growing cases and fatality rate, high doubling rate, potential bed shortage, a sudden spike in active cases, risk of capacity shortfall over the next two months, testing bottlenecks and high confirmation rates. They will be able to coordinate the efforts of various central, state and local agencies and ensure speedy action on the ground.

The Centre’s move assumes significance in the background of the reports that about 30 hotspots account for 70 per cent of the infections and concentrated efforts, coordinated by the Union government, is the best way to deal with them.

That the teams, comprising public health experts, are headed by a senior officer at the joint secretary level reflects the seriousness the government attaches to the work they are expected to do. It is now for the state governments to make the most of the expertise available at their doorstep for winning the decisive battle. The timing also looks promising, as the daily number of infections has started showing a limiting effect for the last couple of days after crossing the 10,000-line.

More focused intervention will be able to bring the number further down and eventually flatten the curve, and the work of the Central teams holds the key to it.

This is not the first time, though, the Union government has deputed its teams to the states but the results were not all that encouraging. Opposition-ruled states had complained that they were singled out by the teams for their lapses. Instead of ensuring better coordination, they ended up widening the gap in the functioning of various agencies further.

Every stakeholder must remember that the Centre-state relations are not in the pink of their health even at the time of this pandemic. It is for the Union government to ensure that the state governments, which are fighting the virus on the ground, are extended the help they needed.

It is almost a now-or-never situation and a slip at this point in time will cost hugely in terms of human lives and economic growth. The Central teams will hopefully realise this and work in full coordination with the state governments. They may also consider bringing the best containment practices to the notice of the states so that they benefit from them.

The efficacy of the teams and the results they produce can be considerably enhanced if the Centre extends a helping hand to the states in terms of finances, too. True, the government has released a share of GST arrears and increased the state’s limits on borrowing. But they ask for more, and justifiably. The Union government must work with the states on this count too and offer them a liberal package. This is not a war, which can be won without fighting it, and hence comes with a cost. The Centre must bear its share and remedial action cannot brook further delay.