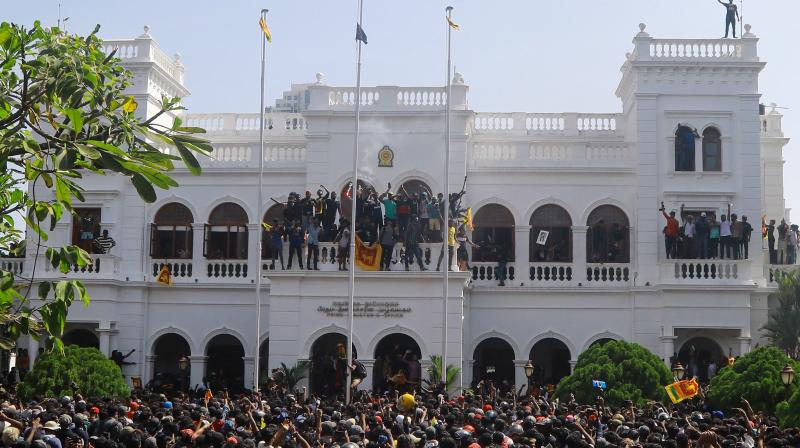 Demonstrators take part in an anti-government protest outside the office of Sri Lanka's prime minister in Colombo on July 13, 2022. (Photo: AFP)

Sri Lanka’s political impasse must end for the nation to address the economic collapse. The Rajapaksas may soon be political history since Gotabaya has begun hopping nations in order to find a haven. It matters little to the island now as to where he ends up and his departure is the clearest sign that the people’s uprising has achieved a substantial portion of its objectives.

A sordid chapter of authoritarian rule by a single family whose members may have looted Sri Lanka systematically may have ended but a political vacuum created in the wake of the Rajapaksas bending finally to the people’s will is likely to hold up the move towards the formation of a legitimate government. Without a credible face at the head of government, negotiations with the IMF for a financial package as bailout will remain stalled.

The constitutionally dubious move to appoint Ranil Wickremasinghe as Acting President is seen as perpetuation of the protection of the Rajapaksa family interests, and the people have been demanding the removal of another constant figure in the political tapestry of the island in the last three decades. His presence as an intriguing survivor in this political vacuum is mysterious as his party did not win a single Parliamentary seat in the last elections and he became a nominated member in recognition of his experience in government.

Mr Wickremasinghe’s diktat to the military to do whatever was required to restore public order may not have gone down well with the protesters who have stood united in their aim of displacing him. But the fact remains that someone must head a government in the interim while the search goes on for a national government with a President and a Prime Minister he can appoint as per the constitution to look after executive tasks.

A people’s determined revolt against misrule and dubious economic policies, which included a cut in taxes at a time of declining tourism and other sources of inward remittances, is to be lauded, especially as it was peaceful save for sporadic outbursts of anger in which the homes of some legislators were set fire to and the PM’s personal residence was vandalised too. It is, however, remarkable, that public property has been largely left undamaged.

In a first sign of a let-up in a remarkable Colombo Spring, the protesters have promised to give up their “Occupy” movement of official buildings, engendering the hope that the process of finding how to formally get rid of Gotabaya who is yet to hand in his resignation may proceed. There would, however, be no escaping further pain as IMF conditions could drive prices up more as subsidies would have to be given up and the currency could hit new lows.

A way must be found out of the impasse that is only hurting as the nation is in a chaotic situation already. Even generous supporters of the Sri Lankan people like India, which extended aid to the tune of $4 bn till now, would rather wait and watch before committing more to the cause. However, food and medicines, which are as essential as fuel, must be kept ready to be sent across the moment peace reigns on the streets of Colombo. The beleaguered Sri Lankan people deserve that.