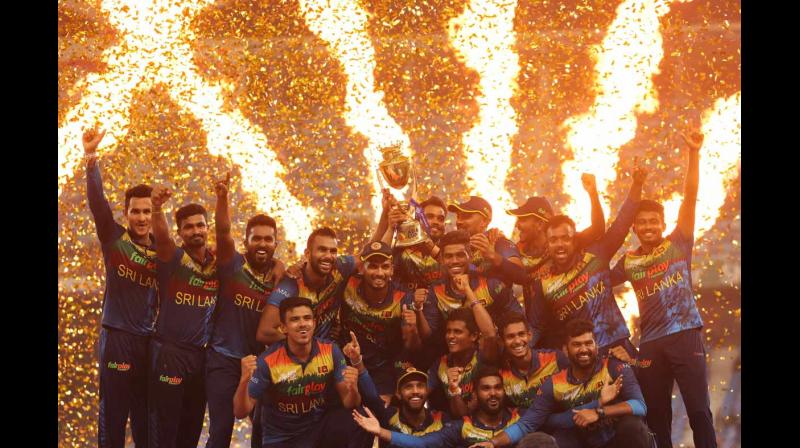 Sri Lanka's players celebrate with the trophy at the end of the Asia Cup Twenty20 international cricket final match between Pakistan and Sri Lanka at the Dubai International Cricket Stadium in Dubai. (Photo: AFP)

In winning the Asia Cup, the Sri Lankan cricketers showed the same exemplary grit that their people have been displaying in the midst of the country’s worst ever economic crisis. Sportsmen may have a way of insulating themselves from what happens in society around them, but it could not have been easy for Dasun Shanaka and his team to stay focused on their objective of winning the cup to cheer up their fellow citizens who suffered excruciating shortages of food, fuel and medicines thanks to misgovernment by the Rajapaksas.

The team needed fierce commitment to the cause to come back into the competition after losing to Afghanistan in the opening game. They were in a bit of hole as they were asked to bat first in the final when the odds seemed to favour the chase, which the Sri Lankans themselves had utilised in beating India and Pakistan in the Super 4. The impressive manner in which Bhanuka Rajapaksa (no relative of the former rulers) and Wanindu Hasaranga shaped the recovery was a tribute to the spirit with which the Sri Lankans play though they are eternally billed as the underdogs.

It is a quirk of rankings that Sri Lanka did not automatically qualify for the main draw of the T20 World Cup as they were ranked below eighth on the cut-off date. They have to play in the qualifiers in a group with Namibia, UAE and the Netherlands from which the first and second placed will be promoted to the main draw.  With their customary tenacity, they are certain to get to the main draw to take on the might of the cricket world in the main competition that begins Oct. 22.

Australian conditions are way different from the atmosphere and slow pace of Asian pitches. What the Lankans promise are more team performances that invariably seem greater than the sum of individual contribution. Sri Lanka may have had super stars in the past but this current team rolls on the team ethic which drives their cricket collectively. They have won Cup events before but in doing so when life itself has got so tough on their island, the Sri Lankan players have shown rare character.