All sorts of organisational preparations have commenced, keeping the poll in mind 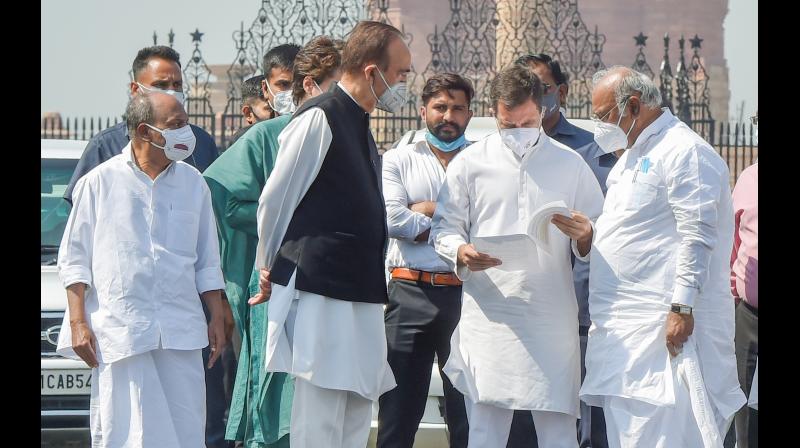 Congress delegation led by Rahul Gandhi calling on President Ramnath Kovind with demands that support the cause of the farmers. (PTI)

When there are large-scale and persistent protests even on a sectional demand, it has the potential to snowball if the government refuses to show accommodation. A ready example that comes to mind is that of a students’ agitation in Gujarat on rising mess prices which, in slow stages, took the form of the massive “JP movement” that led to the defeat of the Indira Gandhi government.

For a variety of reasons, the farmers’ agitation against three central laws aimed at deepening capitalism in agriculture, has not elicited a nationwide response. Yet, the violence against peacefully protesting farmers at UP’s Lakhimpur Kheri, for which the son of Union minister of state for home Ajay Mishra, and his associates, have been arrested and charged with murder after pressure was brought by the intensifying of the farmers’ protest as well as crucial observations of the Supreme Court, touches a chord in the wider populace.

It is in this sense that Lakhimpur Kheri becomes a flash point and has the potential to become a rallying point for forces that are opposed to the Narendra Modi government in Delhi and the Yogi Adityanath government in Lucknow. It cannot be overlooked that the violence against farmers by a belligerent squad of BJP leaders and supporters comes in an overall atmosphere of reduced economic circumstances for a large section of Indians across the country on account of government policies.

Herein lies the significance of a high-profile Congress delegation led by Rahul Gandhi calling on President Ramnath Kovind with demands that support the cause of the farmers. There are two basic demands — that the Union minister, whose son was arrested, must be removed from the Union council of ministers if he does not resign voluntarily; and that the farmers must receive justice. These are the demands that the leaders of the farmers’ agitation have themselves raised.

When ministers dig in their heels and refuse to resign in the face of widespread protest against their actions, they disregard the basic spirit and conventions of democracy which, on the whole, have been followed in this country. There is strength in the argument made by farmers and Congress leaders that an impartial probe of the incident involving Mr Mishra’s son cannot be expected if the minister remains in office.

Nearly a fortnight has passed since a convoy of motor vehicles ran over a posse of protesting farmers, killing several on the spot, but the Union government, the UP government, or the BJP leadership, or for that matter the RSS which never tires of endorsing the government policies, have almost calculatedly refused to make a comment that may be mistaken either as a criticism of the aggressors or expression of sympathy for the victims.

In contrast, what BJP leaders at various levels have interestingly done is to articulate the view — reported widely in the media — that victory for the party in the UP Assembly election, which is only a few months away, cannot be in any doubt. All sorts of organisational preparations have commenced, keeping the poll in mind.

On the Opposition side, Priyanka and Rahul Gandhi and their colleagues have drawn public attention on account of the dramatic circumstances of their visit to famers’ families. Ms Vadra also addressed a very large public meeting on the outskirts of Varanasi, PM Modi’s Lok Sabha constituency. Samajwadi Party leader Akhilesh Yadav has conducted a tour or “yatra” around UP districts. But it is early to say what impact these might have on the election scene. Principally this is on account of the Congress’ widely noted organisational weaknesses. If Opposition parties can show they are united in taking up the people’s cause, and approach the polls in that spirit, they can capitalise on the present mood.