The Prime Minister has offered those out of work no help other than a reminder that we should be 'compassionate'. That is simply not enough. 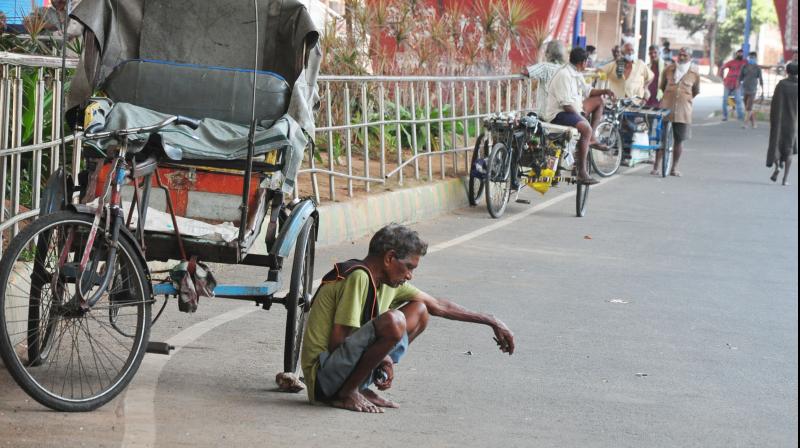 Rickshaw pullers in forlorn wait for custom under the shade of the Asilmetta flyover in Visakhapatnam. (DC Photo: P Narasimha Murthy)

Prime minister Narendra Modi has announced that the 21-day lockdown, which began on March 24, is being extended to May 3, making it a 40-day exercise to take on pandemic Covid-19. Announcing this to the nation on Tuesday, the prime minister thanked the people for their perseverance and exhorted them not to lower the guard even when promising some step-by-step relaxations after April 20. Mr Modi briefed the nation on the consultation process the Union government has initiated with the states, and the cooperation they are extending. The Prime Minister reassured the nation that it’s a joint fight in which everyone has a decisive role.

No one with an idea of the nature of the challenge the nation faces now will grudge the decision to extend the lockdown by another 19 days. And the consultative way in which the government arrived at the decision is also praiseworthy: the prime minister confabulated with the chief ministers at least twice after the lockdown was announced. While welcoming the reassuring words of the Prime Minister and the initiatives the Union government has been taking, what one misses is action on the ground. The Prime Minister, who took solace in the fact that India is better now compared with other countries that were at par with us in terms of infection one and a half months ago, did not specify the steps to ensure that we do not follow their graph. He disappointed the states and the economy which were anxiously waiting for a financial package. Several chief ministers had raised during their video-conference with the Prime Minister the precarious financial position with which they engage the deadly virus but it does not seem to have an impact on Modi. The Union government should be deceiving itself if it believes it can leave the major share of the burden on the states, which have little or no sources of revenue. A vast majority of people who are engaged in creating wealth and distributing it have ceased to be doing so, thanks to the lockdown. They include most farming and industrial activities that range from micro-enterprises to shop floors. Anyone can imagine its fallout, for not many Indian units have the wherewithal to survive long periods of non-productivity. Most have a hand-to-mouth existence; even the middle-level units would start feeling the pinch, which they will be forced to pass down. The Prime Minister offered them no help other than a reminder that they should be “compassionate towards the people who work with” them. This is not simply enough.

Economists and political parties have demanded that the government open up its foodgrain godowns to the poor to preclude the possibility of hunger deaths due to food inflation. Many sections of people, including migrant workers, are unable to access the various schemes and hence the government should immediately come up with a scheme to cover every Indian, they say. The government should consider the suggestion seriously and act. Lockdown should not kill people on its own.