Govt must act as fall in prices hurts farmers

The Centre’s silence is alarming, specially since the government expects the farmer’s income to double by 2022. 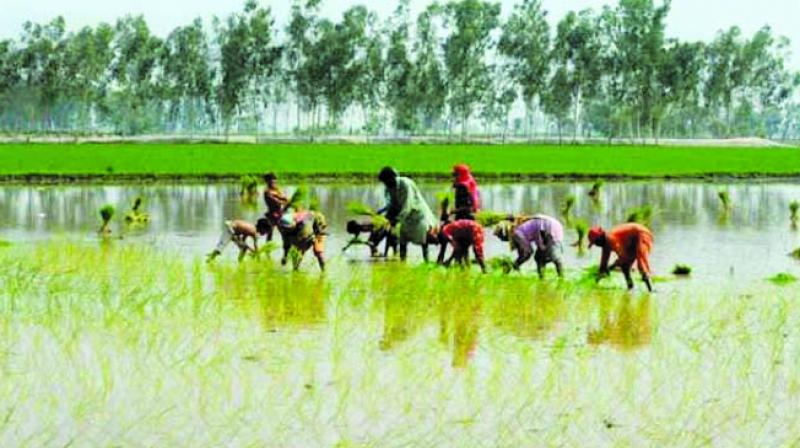 The fall in both wholesale and consumer price indices in June is good news for the consumer and those who track inflation, but it should ring alarm bells at the Prime Minister’s Office. Agriculture is crying out loud for a fair policy for farmers and the sector. This low inflation is also at the cost of the farmer. While the general fall in prices is bad for the economy as it reflects lack of demand for manufactured goods and services, it is worse for the farmer, specially since rural India is already in distress. Much of the fall in inflation is at the cost of farmers since food prices deflated by 2.1 per cent in June preceded by a one per cent deflation in May. In actual terms, this means farmers will get less for their produce and the government should take steps to mitigate this if it wants to avoid the consistent gruesome suicides by farmers. The farmer is always at a disadvantage because when he produces a bumper crop as it happened this year, there is a fall in prices because of a glut and when there is a bad year he suffers as the government resorts to imports to depress prices that rise due to shortages.

There is no vocal farmers lobby to plead the case for import duty on imported pulses and edible oils, for those who grow these crops so their chances of a fair price are zero. The strong lobby of sugar farmers survive as they are able to get the government to increase the duty on imported sugar from 40 per cent to 50 per cent in order to keep prices at a reasonable level. The prices of pulses today is a clear example of this step-motherly treatment to the farmer. From Rs 200 per kg earlier for pulses farmers are now getting between Rs 60-65 per kg. There is a similar fall in channa, urad, moong and other pulses and vegetables.

The Centre’s silence is alarming, specially since the government expects the farmer’s income to double by 2022. How is this possible under the present circumstances? The Prime Minister would do well to tackle this issue in his next Mann ki Baat if not earlier. More important, the government should come out with a White Paper stating what the income of the farmer is at present so that the doubling figure has an anchor. The government needs to understand its present policy is only increasing the economic gap between urban and rural India. It is hoped that the government shakes off its pro-urban, pro-industry policy so that rural India can survive.

The fall in inflation has seen a demand for a cut in interest rates by the Monetary Policy Committee of the Reserve Bank of India by the business and banking lobby. This seems misplaced considering that interest rates form a mere three per cent of the cost of production. There needs to be introspection on the more alarming issue of why private investment is not forthcoming and why banks are diffident to lend.