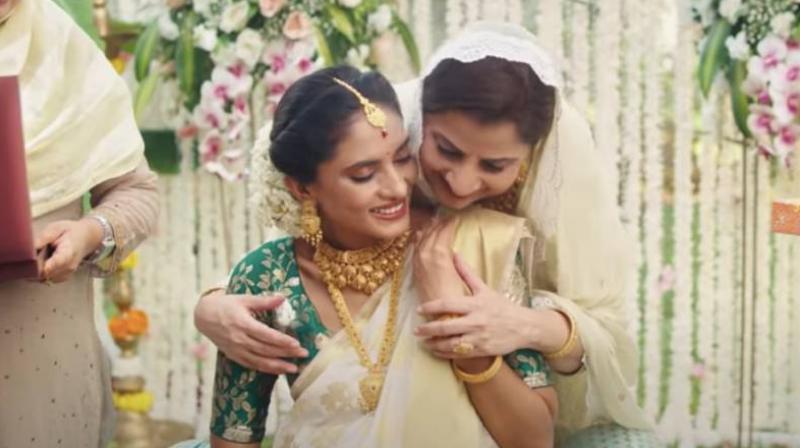 Videograb from the controversial Tanishq ad.

Titan stumbled, when its very prominent jewellery brand was armtwisted into pulling an ad that depicted a happy Hindu-Muslim married home. Like all media, visuals in an advertisement play a huge role in shaping our society. This made this ad — which subtly encouraged viewers to exercise progressive values — both attractive and important. However, it received backlash from those who subscribe to a certain ideological view. Quite unaccountably to freethinkers and progress-loving people, the Hindutva brigade raised the bogey of “love jihad” and opposed this ad.

Their stance militates against who we are as a nation and who we aspire to be. It must be remembered that a composite social culture as well as secularism are important Indian values. The Indian nationalism today is not the nationalism of a particular religious, caste or linguistic community but a nationalism of all the people of India. No one community is privileged by our Constitution, and this is vouched for by the existence of the Special Marriage Act, 1954. It provides for a special form of marriage for the people of India, irrespective of faith. Not only interfaith couples, anyone who wishes to opt for such a marriage can get married under this law.

Hence, much as BJP minister Himanta Biswa Sarma would like to carry out a crackdown against “love jihad” in Assam, post the Assembly election there in 2021, inter-faith marriages are constitutionally endorsed. It is unlawful to bully, harangue or heckle anyone on this account, and forcing a written apology from the owner of a Tanishq store in Gandhidham amounts to that.

“Cancel culture” is the favourite catch-all used by the Indian right wing today to cry foul against what it sees as liberal and leftist injustices and hypocrisies. This particular type of Hindutva “cancel culture”, however, badly hurts the image of the country and its soft power around the world.

The government should make every effort to find out who the trolls are and bring them to book. Sometimes they can defeat even stout-hearted people. Still, we have the wonderful examples of Parle and Bajaj Group who have come out openly and said they will not be cowed by similar threats. These are good examples to follow.