Indian economy is certainly facing a crisis. This, however, does not justify use of violence against migrant labourers 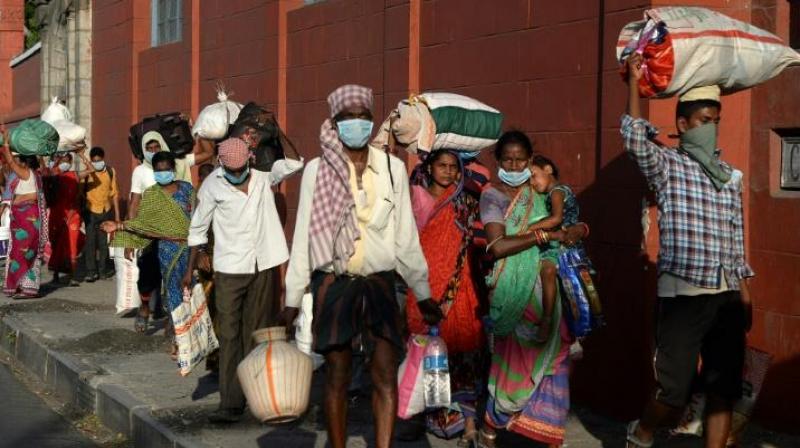 Stranded migrant labourers in Chennai, in southeastern India, prepare to board a special train to take them home after the government eased lockdown measures (AFP)

All Indians are caught in the same trap that of distress signals emanating because of corona-panic. With due respect to sympathy voiced in favour of migrant labourers rushing back to their villages, it is pertinent to understand their dilemma from their own perspective.

Yes, they have no reason or desire to stay back in urban areas without any means of earning. They had left their families and roots behind in quest of monetary gains. When deprived of it and lashed further with corona-panic, why wouldn’t they choose to rush away from cities?

Photographs and videos of their walking back with their luggage and children as well as a few with ailing parents on their shoulders are simply a poignant indicator of urban distress forcing them out back to their rural homes.

From their own angle, migrant labourers have been forced to pursue this path. This is a distress signal of what unplanned lockdown has spelled for the poor, of which these are a significant percentage. Just when prospects of easing lockdown restrictions to revive the economy seem to have begun being worked upon, employers of these migrant labourers are facing the result of their distress.

How are they expected to renew their business without their manual labourers?
So, the preceding distress signal was apparently responsible for attempts made to prevent migrant labourers in several areas from rushing back to their villages.

Force was also reportedly used to prevent them from so doing. Some held back in a shelter home tried escaping from there. A few of these were caught and brought back forcibly. What does this all indicate? Force and violence seems to have been resorted to in some areas to prevent migrant labourers from returning to their own homes.

Clearly, the question posed here a major distress signal for Indian democracy is that of these labourers being almost treated like slaves bonded labourers. Surely, corona-wave was not expected to reduce Indian democracy to this stage. But it seems to have.

Indian economy is certainly facing a crisis. This, however, does not justify use of violence against migrant labourers to prevent them from leaving cities. They are human beings and have their own dignity as well as freedom.

Think of it, whether they are dressed in torn, dirty clothes or howsoever, their own dignity to eat at home from their own farm produce or that of their immediate relatives commanded them to go back.

They didn’t want their children to sleep hungry. They didn’t want to beg for food or wait for promised help to reach them. What else could have prompted a few to try and escape from shelters they were kept in? Moreover, lockdown has spelled distress signals for beggars too, with no one to turn to.

Seriously, the phenomenon of migrant workers walking back may be viewed as a silent rebellion by them against the establishment. This is further proved by many commenting that they are not ever going to return. Yes, corona-panic may be viewed primarily as responsible for having given rise to this feeling within them. Cities no longer spell the same glamour for them as they did before the coronavirus struck.

There is nothing surprising about this. A major percentage of those who had planned visits abroad and/or even outside their cities are likely to remain confined to their own domains of residence even after lockdown is lifted. This clearly signals that distress signals ignited by coronavirus are likely to remain active for quite some time for all, including migrant workers.

The migrant workers’ silent rebellion is suggested by their heading back to their villages. Each took his/her own decision but in keeping with what others of their working community and regional origin decided.

Without being guided by any leader, fear of falling victim to Covid-19, which was enhanced by the impact of lockdown, prompted lakhs of them to walk away from urban life. As suggested earlier, this spells a major distress signal for their former employers.

At present, as significant as the war against Covid-19 is the need for all to fight against fear/panic fuelled by this virus. Each has to fight his/her own battle and defeat distress signals caused by corona-panic.

All are aware of physical proximity displayed on the big screen to ensure commercial success of this industry. Now, social distancing is probably raising a billion questions for all involved here about how to shoot scenes, whether of love or violence.

It is interesting, at the time this piece was being written, there were no reports of any instructions being issued about what corona-distance should be maintained while shooting for movies, serials, ads, etc. Here too, lure of lucre or any other attraction is not likely to lead to revival at the earlier pace.

In this context, there is nothing surprising about those having begun receiving newspapers deliberating on how to sanitise them before reading them, whether by leaving them in the sun for several hours or by some other way. Though a few newspaper-addicts prefer not to give such “sanitisation” much importance, the fact that it spells distress for others cannot be sidelined.

The corona-panic cannot last forever. But it cannot also disappear in a jiffy. As of now, even some doctors have closed their clinics, with several giving online (Zoom) consultations.

Clearly, just as educated urban-residents are facing distress signals caused by corona-panic so are migrant labourers, who have chosen to return home.

The prospects of the latter re-migrating can resume only after city-life regains its prior normalcy. It is possible distress signals may not have reached this stage if lockdown had not been enforced without adequate planning.

Paradoxically, with increase in number of Covid-19 positive cases, steps are being taken to ease lockdown restrictions.

Corona-politicking can perhaps never be easily understood by most, including those formulating measures. This certainly may be viewed as a separate distress signal threatening Indian politics!