For a diverse India, Hindi call is divisive

Their cultural identities are not to be submerged in this overtly political move to promote Hindi as a national language. 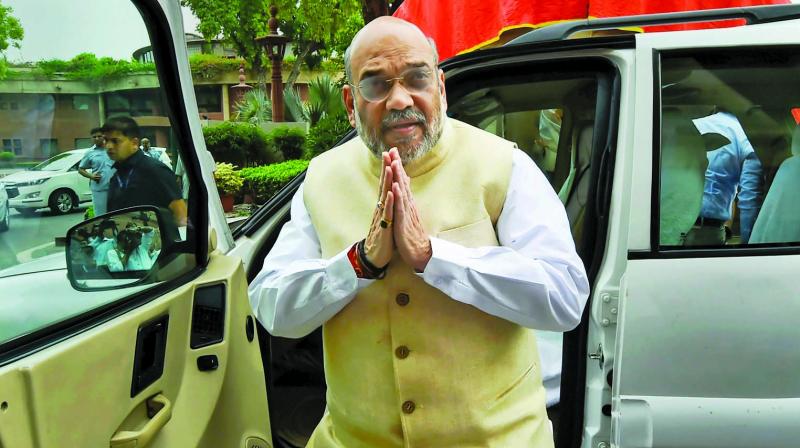 The home minister, Amit Shah’s appeal to make Hindi the one language to “bind the whole country” is an insidious attempt to promote the “one nation, one religion, one culture, one language, one leader” ideology of the BJP-RSS. Mr Shah may have been tweeting on Hindi Divas. Even so, what he says as the home minister has a weight far beyond the forum he used to say Hindi should become the identity for the whole country. What diverse India needs most is unity, not uniformity. The ones who fail to recognise this and plot to homogenise a plural and diverse India are those who pursue their “Hindi, Hindu, Hindutva” philosophy as a way of promoting their distorted idea of India. Down south, such a chauvinistic pursuit of one of the official languages as the national language is invariably met with scorn, derision and outright contempt.

The Dravidian heartland of the south, Tamil Nadu, which engendered in Tamil a classical language of considerable antiquity and which became a primary independent source of modern Indian culture and tradition, would be the last to countenance any such effort like that of the home minister. Mr Shah makes no bones about supporting a sinister method in the Centre insisting on communicating in Hindi on the premise that it is the language of the majority. Mahatma Gandhi, who spoke of Hindustani as a colloquial form of communication rather than Hindi, has been misquoted by Mr Shah in his assiduous attempt to give Hindi an importance not in keeping with its spread in a country with 22 official languages. A passing understanding of Hindi in cosmopolitan cities as well as in many states north of the Vindhyas is no index of its national stature, nor is it the mother tongue of many of the people of India.

The anti-Hindi agitations of Tamil Nadu in the wake of Mr C. Rajagopalachari making its study compulsory in 1938 culminated in student unrest and large-scale violence that ultimately led to the ouster of the Congress in the state in 1967 and the rise of the Dravidian DMK, and then its rival AIADMK. The point is India is a nation of many cultures and traditions and home to a heterogeneous people speaking many languages and their dialects. Their cultural identities are not to be submerged in this overtly political move to promote Hindi as a national language.

Hindi’s sworn opponent, Tamil Nadu, has been joined by Kerala whose CM has been unequivocal in stating plain truths on the Sangh Parivar’s Hindi agenda being the new battlefield. Southern India believes Hindi promotion is nothing but an attempt to enslave people who do not subscribe to the naked majoritarianism of the BJP. Sentiment against Hindi imposition finds echoes in Karnataka, Telangana and Andhra Pradesh, besides West Bengal, Odisha and the entire North-East. Mr Shah’s espousing of Hindi flies in the face of constitutional guarantee of the right to a distinct language as well as “unity in diversity”, which has been modern India’s template of tolerance and acceptance.