AA Edit | Transparency the key to success of vaccine drive

If a vaccine is under trial and has not gone through the due process, its administration should be called clinical trial, not vaccination 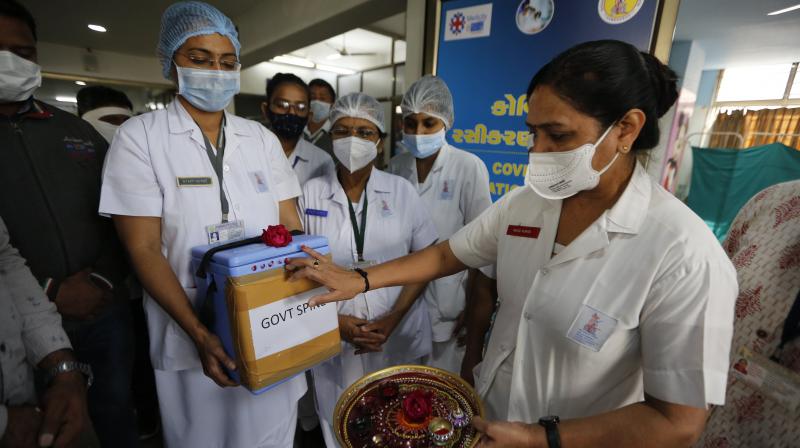 A nurse, right, performs rituals to a box containing COVID-19 vaccines upon its arrival at a government Hospital in Ahmedabad, India, Saturday, Jan. 16, 2021. (AP /Ajit Solanki)

India has a population of 136 crore people and the highest number of Covid-affected people after the United States, and hence a campaign to inoculate the entire population is critical to the success of humanity’s fight against the pandemic. It ought to be an exercise without parallel in history for the sheer number of the target group and the logistical and economic challenges it would face. The Union government is working with the states and vaccine manufacturers to ensure that about three crore people, who are mainly Covid warriors, are inoculated in the first phase with two made-in-India vaccines in a drive that began on Saturday. Reports say 1.91 lakh people were vaccinated on the first day against a target of three lakh.

Everyone wants the campaign to be a success, but it is regrettable that the government has been less than transparent about it. Prime Minister Narendra Modi takes justifiable pride in the fact that both the vaccines are made in India and underlines the role of Indian scientists in making it happen. But the truth is that one of the two vaccines, Covaxin, which is developed jointly by the Indian Council of Medical Research and Hyderabad-based Bharat Biotech International Limited, and manufactured by the latter, has been in a clinical trial mode. Those people who were given the Covaxin jab were made to sign a consent form, which says that they are participating in a trial. A section of doctors in the government-run Dr Ram Manohar Lohia Hospital in Delhi insisted that they be given the vaccine developed by Oxford University and manufactured by Pune-based Serum Institute of India. They said they are a bit apprehensive about the lack of complete trial in the case of Covaxin.

This is unfair and unacceptable. If a vaccine is under trial and has not gone through the due process, then its administration should be called clinical trial, and not vaccination. It should be given only to volunteers and its administration should not be part of the inoculation campaign. This is the minimum the government owes to the people. The Prime Minister’s statement that Indian vaccine scientists, medical system, Indian process and institutional mechanism are trusted globally and that this trust is earned with a consistent track record is true, but it does not square with the present campaign. Also true is the fact that about 60 per cent of children the world over receive life-saving vaccines which are made in India and passed through stringent Indian scientific tests; but the only point is that Covaxin has not gone through those tests.

That the head of All India Institute of Medical Sciences and the member (health) of Niti Aayog took the Covaxin jab proves nothing; it can only be seen as a persuasive act. Even if the Prime Minister is administered the vaccine, it proves nothing except sending a message on vaccination, not on the vaccine. The government must be upfront about the whole programme and respect science and scientific processes. Tom-tomming national pride is not a great idea in the face of a pandemic.