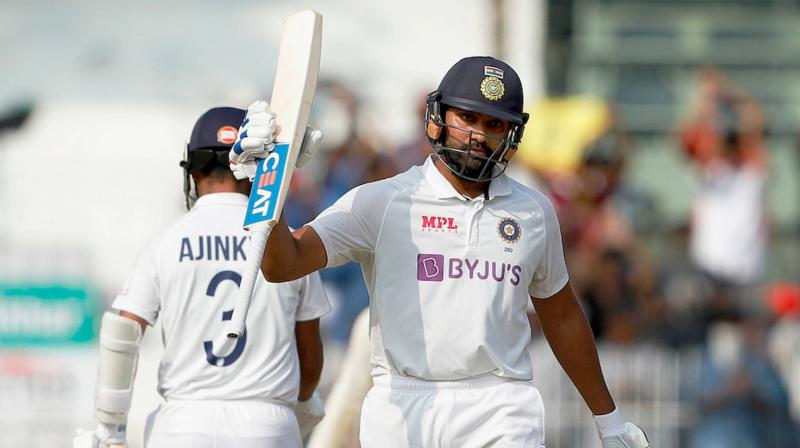 Rohit Sharma raises his bat after he scored 150 runs during the 1st day of second cricket test match between India and England, at M.A. Chidambaram Stadium, in Chennai on Feb. 13, 2021. (BCCI/PTI)

On another dust bowl of a pitch that played worse than the first at Chepauk in Chennai, Team India beat England comprehensively to restore parity in the Test series. As a team that seems to enjoy being stung into action after losing the opening encounter as in Australia recently, the Indians may feel energised towards winning the series 2-1 or 3-1 and qualify for the World Test Championship final in London in the summer. Given a start in swashbuckling style by Rohit Sharma, a phenomenal batsman in home conditions, the Indians batted with great discipline in both outings. Unfortunately, such discipline was not seen in the spectators who were allowed to witness a match for the first time in India after a long gap due to the pandemic. The mask was an exception rather than the rule in the stands and physical distancing went for a toss, as it usually does in public events, including political rallies.

The heroics of Chennai cricketer Ravichandran Ashwin, who made a second innings century that belied the surprising bounce, turn and spin the designer Indian pitch was increasingly offering, was the clear highlight. He took five wickets in an innings and eight in the match. Statistically significant as his fifth Test match century was, it may be too early to compare him with past grass like Sir Garry Sobers, Sir Ian Botham and Kapil Dev. Such pitch conditions are loaded in favour of slow bowlers and do not create a good viewing spectacle as a mini dust storm seems to kick up each time the ball pitches. Regardless of the results which were even since England won the toss in the first Test and batted extremely well, these pitches do not make for good cricket. The performance of this Team India is so good it does not need the assistance of home conditions to perform against all comers.