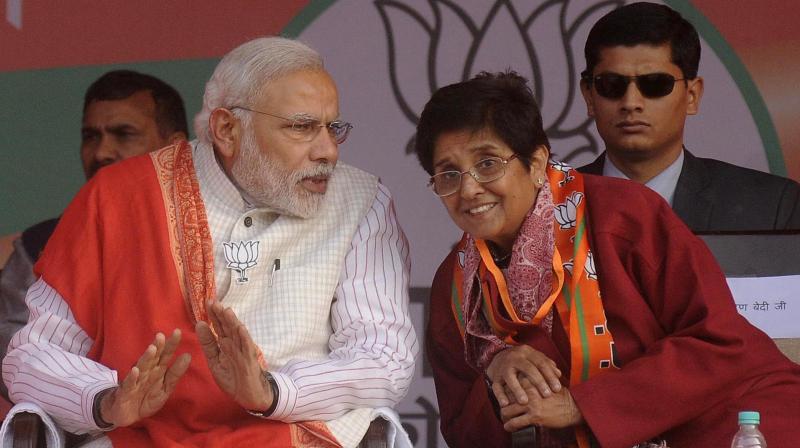 Having lost Karnataka and Madhya Pradesh after the last general elections and Goa without even getting to re-establish its rule there, the Congress is proving somewhat inept at keeping its flock together in the face of the allure of defections. (Photo: Pritam Bandyopadhyay)

The removal of Kiran Bedi as lieutenant governor of Puducherry is only a subplot in a long political drama in the Union territory. The larger plot is the use of the political toolkit named “Operation Kamal (Lotus)” to destabilise the Congress government of V. Narayanasamy by engineering the defection or resignation of MLAs. That it happened with finality at a time when the polls are probably just a couple of months away is incidental to a pattern of inducements from the national ruling party succeeding in bringing down an elected non-BJP government. With the resignation of four MLAs, the government is in a minority in the 30-member Assembly and the chief minister would be expected to put in his papers and assume the role of a caretaker till the polls or face a trust vote, which he would lose.

Moving Kiran Bedi out is like manoeuvring a piece on the chessboard. She was far more powerful than a pawn in playing her role as the trusted lieutenant who did not allow an elected government to function smoothly in carrying out even welfare programmes. So obstructive was she of administration and policy execution leading to courtroom battles and awkward power tussles in the public domain that those defecting to the BJP may have also complained that her presence could be a negative factor in the election campaign. As a career-long stickler for the letter of the law, Ms Bedi had mastered the art of obstruction and may have been guilty of trying to run a parallel power centre in the Raj Nivas, which is possible in the set-up of a Union territory even if it has a government elected by the people.

The shifting of the lieutenant governor and placing a seasoned political figure like the Telangana governor Tamilisai Soundararajan temporarily in charge may smoothen the run-up to the polls but the people would be deciding who will rule Puducherry for the next five years. With heavy anti-incumbency said to be weighing against the Congress, its staunch southern ally, DMK, has been increasingly chary of continuing with the arrangement.

The current scene only increases the desirability of aligning with the NR Congress of former CM Rangasamy, who becomes a major player in the Tamil-speaking former French colony that goes to the polls along with Tamil Nadu, Kerala, Assam and West Bengal this summer.

Having lost Karnataka and Madhya Pradesh after the last general elections and Goa without even getting to re-establish its rule there, the Congress is proving somewhat inept at keeping its flock together in the face of the allure of defections. The coincidental visit of Rahul Gandhi at a time of trouble for the Puducherry government may not have done much to enhance the prospects of keeping the alliance together. Facing a poll after a tumultuous four-and-a-half years spent bickering over the differences between the CM and the lieutenant governor may just mean that a weakened Congress would be facing a big challenge. Of great interest would be who the voters would choose in this scenario.