In India, or in countries outside Western Europe and North America, such happenings will be criticised but will not be unusual 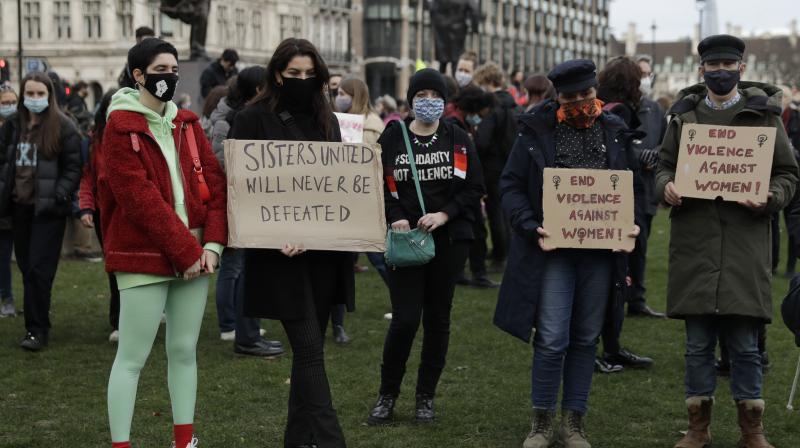 People hold up signs during a vigil to reflect on the murder of 33 year old marketing executive, Sarah Everard, in London, Monday, March 15, 2021. The British government is under pressure to do more to protect women and ensure the right to protest as Parliament prepares to debate a sweeping crime bill amid anger over the way police broke up a vigil for a young murder victim abducted on the streets of London. (AP/Matt Dunham)

So dramatic — and disturbing — have recent events been in London in an overtly police versus citizen polarity that there is a risk that the demonstrations of women, and social media interventions by thousands of them following the kidnap and murder of a 31-year old woman, Sarah Everard, may end up being narrowly compartmentalised.

The London Metropolitan Police have arrested a policeman in the kidnap-murder case. Ms Everard was walking home from a friend’s house to her own address on March 3 evening and apparently vanished. The remains of her body were found afterward. A large number of women gathered to lay flowers in her memory. The police, gathered in strength, manhandled the women, dragging some on the floor, tackling them violently, pinning some down.

The video of this is distressing. The police trotted out banality: unlawful gathering, Covid-19 restrictions. Not a word about men police attacking a peaceful assembly of condoling women.

In India, or in countries outside Western Europe and North America, such happenings will be criticised but will not be unusual. But in Britain?

The whole catechism of an advanced capitalist, liberal democratic, order- free speech, free assembly, gender parity, right to protest- went out of the window. In citizen versus state, the state was seen to be grotesque.

The Everard story is well beyond being a common crime. It underscores violence against women in public places. According to a UN report, 70 per cent of British women complain of sexual harassment in public. The outpourings of anger, grief, even helplessness, of thousands of British women on social media in which they detail the lengths to which they go to keep themselves safe (taking longer but better-lit routes, wearing bright clothes for visibility), are compelling.

In this grim background is also discernible the spirit to challenge and change. As a movement, “Reclaim Our Streets” is catching on in Britain. There have been protest marches, one in Parliament Square. We need this in India too. Ask any girl or woman. Of course, London Police must be held to account as the police in urban India, both infamous for “institutionalised violence”.