AA Edit | Why does Centre want a 'viceroy' to run Delhi? 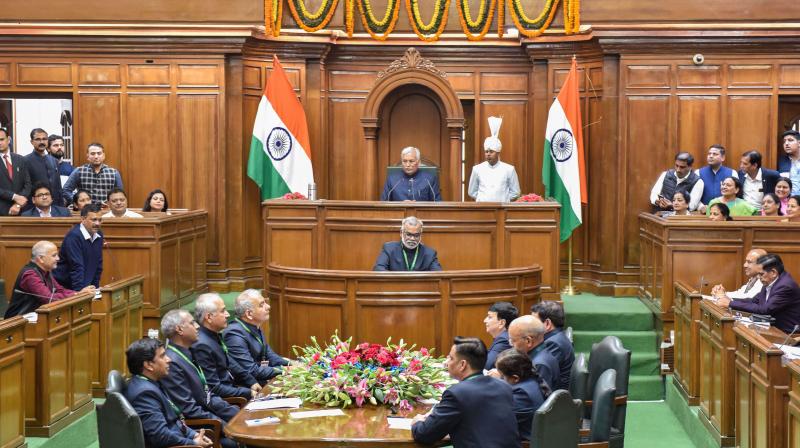 The proposed change in law introduced by the Modi government will effectively render the Arvind Kejriwal government superfluous, practically reducing the present Delhi Assembly — which was brought into existence in 1993 under the NCT Act- to a nullity. (Photo: PTI)

The Narendra Modi government plans to constitutionally aggrandise the office of the lieutenant governor of Delhi at the expense of the elected chief minister of the Union Territory. A proposed amendment to the National Capital Territory of Delhi Act, 1993 in this regard was moved in Parliament earlier this week.

Under the proposed scheme, the “Government of Delhi” would mean the L-G. This is a denigration of the existing arrangement under which the UT elects an Assembly whose leader assumes the office of chief minister and heads a council of ministers appointed by him, which constitutes the apex of the elected government.

The L-G, who is the representative of the Centre, functions under the advice of the council of ministers. The remit of the holder of this office is restricted to the three portfolios of land, police, and public order, which are the domain of the Union. In the UT’s wider administration — covering, for instance, fields such as education, health, power, water, transport, finance, general administration — it is the writ of the elected government that runs, barring municipal governance which comes under the Municipal Council Of Delhi (MCD) which has been partitioned into three geographical units.

The proposed change in law introduced by the Modi government will effectively render the Arvind Kejriwal government superfluous, practically reducing the present Delhi Assembly — which was brought into existence in 1993 under the NCT Act- to a nullity.

For all practical purposes this amounts to giving Delhi the Kashmir treatment. J&K was reduced from a full-fledged state to a UT. Delhi is being degraded from being a UT with an elected Assembly to one — which — for now — will have an Assembly that has been neutered. It will no longer throw up a government elected by the people. In a way, this takes us to British colonial times when the Viceroy, representing the Crown, held superior powers to that of an elected government in the post-1935 period.

To recall history, from 1952-56, Delhi had an elected Assembly and was a state. This was a time when the idea of state boundaries was evolving. The national capital was made a UT in 1956 under the States Reorganisation Act, but did not have an Assembly. The elected Assembly came in 1993 through the NCT Act and Delhi became partially a state.

Since the national government, Parliament, and diplomatic missions were located in the territory of Delhi, it was understandable, for practical reasons, that the Union should seek to have land, police and public order under its direct authority, as is the case with Washington DC and Canberra.

Occasionally, there was confusion over the question of authority — even minor friction — between the elected government of the UT and the Union, but this was nothing that wasn’t sorted out without fuss.

Former chief minister Sheila Dikshit won three elected terms and had little difficulty negotiating her way with BJP as well as Congress governments at the Centre. In contrast, current CM Kejriwal has given the impression of being calculatedly combative in order to enhance his popularity. For its part, the Modi government too, exploiting its control over the police and the all-India services, has played rough with the elected government. But political relationship between parties governing the Centre and the UT must not be permitted to diminish the constitutional status and institutional integrity of geographies.

Tags: delhi assembly to be nullified, delhi to become a ut without and assembly, delhi, national capital territory of delhi act, 1993, government of delhi, nct act- to a nullity, delhi assembly