AA Edit | If PDP, others cohere, Centre will be afraid

If the Kashmir parties stick together in the foreseeable future, the BJP’s pursuit could prove Sisyphean 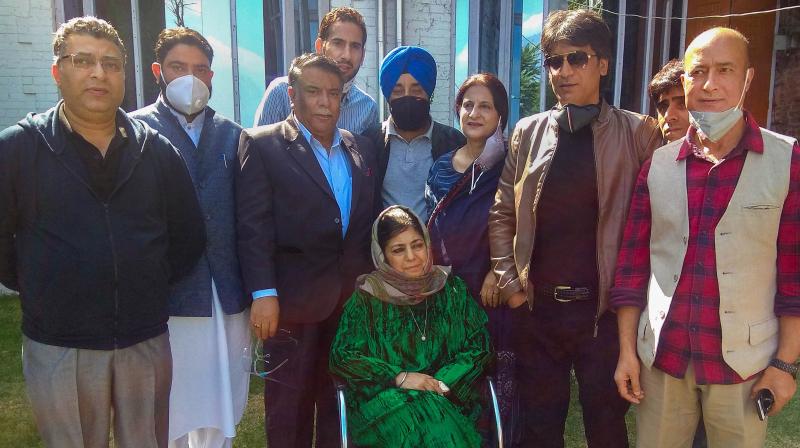 Former Chief Minister of Jammu and Kashmir and President of Peoples Democratic Party (PDP) Mehbooba Mufti poses for a photograph with senior party leaders, at her residence in Srinagar, Wednesday, Oct. 14, 2020. Union Territory administration revoked the Public Safety Act charges against Mufti, more than a year after she was detained following the abrogation of the special status of the erstwhile state. (PTI)

Earlier this week PDP leader and former chief minister Mehbooba Mufti was freed from detention after 14 months. With this is raised the prospect of the coming together of every mainstream party in Kashmir — the regional parties as well as the Congress and the CPI(M) — on a common platform to confront the Centre.

This has not happened before and is a development of singular significance. It has the potential to prevent the ruling BJP from striking political roots in the Valley, the saffron party’s thwarted decades old wish. To make this dream come true, the RSS-BJP, using its power at the Centre, sought to neuter Kashmir and impose a militaristic dispensation as a way to bulldoze its way through. If the Kashmir parties stick together in the foreseeable future, the BJP’s pursuit could prove Sisyphean.

Kashmiri politicians are notorious for their inability to cooperate. Now they have the opportunity to turn this on its head. To remain accommodative toward one another until the next Assembly election in order to present a united face to the ruling party and its local hangers-on is the first practical challenge before them.

They have cleared the first hurdle by gathering at Ms Mufti’s residence upon her release to reaffirm their commitment to the Gupkar Declaration, which enjoins them to unitedly work for the restoration of Article 370 of the Constitution that was abrogated on August 5, 2019, ending J&K’s constitutional autonomy.

Unlike former CMs and National Conference leaders Farooq and Omar Abdullah, who spoke in a measured tone upon their release a few months before Ms Mufti, the PDP leader used direct language to criticise the Centre’s action of last August, calling the step “illegal” and “unconstitutional”. She has good reason to speak her mind. The BJP first befriended her party, permitted her to be the leader in a coalition government with it, and then stabbed her in the back, and in doing so stabbed the people of J&K in the back.

But more than using sharp language, the PDP, weakened through

defections and desertions, and the others, have to show through their action whether they can summon the ability to cohere in the face of

possibly renewed repression. If they can, it is the Centre that will be on the back foot.

Dr Abdullah’s defiant recent interviews, including the one in which he speaks of going to any lengths for the restoration of Article 370, his bringing in the China factor (on account of the Ladakh situation), although clumsily phrased thus permitting the BJP the short-term joy of politically hammering him, is apt to unsettle the ruling dispensation. The NC leader’s reminder that it was Prime Minister Narendra Modi who had cavorted on swings with Chinese leader Xi Jinping can hardly be a source of comfort.

The Modi government’s tenure as bailiff in J&K will now be tested. The economy is practically finished, terrorism is back under central rule, and there is incipient political unity against the BJP.