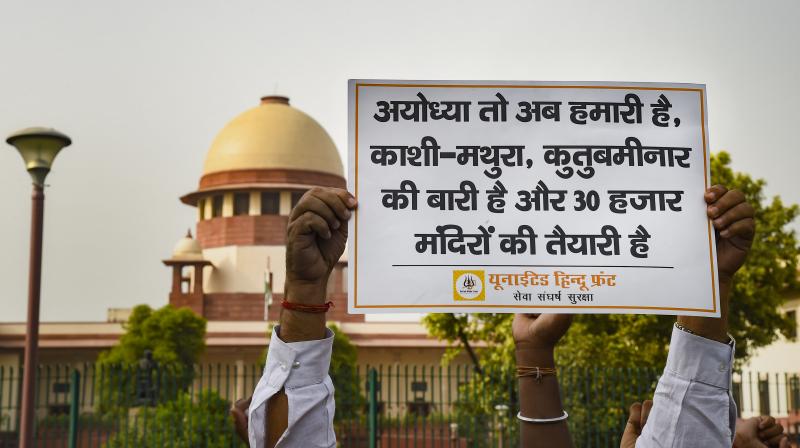 Members of the United Hindu Front stage a demonstration as the hearing of the case of Varanasi's Gyanvapi Masjid-Shringar Gauri Temple complex's survey is underway in the Supreme Court, in New Delhi, Tuesday, May 17, 2022. (PTI)

Even before political opportunism could stoke public emotion to intense hysterical levels, the Supreme Court has, with utmost wisdom and sagacity, quickly, restored status quo, balance and temperance to the issue of the Gyanvapi mosque in Varanasi, after a local court, allowed a survey to be conducted to establish, or refute, archaeological and historical evidences about the primordial character of the structure.

The Supreme Court bench, headed by Justice D.Y. Chandrachud, also comprising Justice Pamidighantam Sri Narasimha, sternly instructed the local court in Varanasi and administration to provide full protection to the structure, including the shivling that was reportedly found during the quick, explorative survey. The SC also ordered the local administration to ensure that devout Muslims are not impeded from having access to the mosque to offer prayers, the namaaz, or conduct other traditional religious observances.

The apex court, which will hear the matter again on Thursday, rightly removed the advocate commissioner, Ajay Kumar Mishra, from his post, besides giving the panel two additional days for submitting its survey report, moves which are bound to ensure both sides are satisfied that the processes followed can and will dispense justice.
A multitude of voices of concern have been heard across the country that Gyanvapi in Varanasi could soon play out as a redux of Ayodhya. The contentious issue of the Ramjanmabhoomi-Babri Masjid defined the conflicts in politics and society for decades, lasting in the courts for over half a century, for which the country and its people from all sides have paid a heavy price.

Even though both the BJP, led by Prime Minister Narendra Modi, and its parent voluntary organisation, the RSS, represented by its sarganghchalak Mohan Bhagwat, had taken a reconciliatory stance after the final verdict of the full bench of the Supreme Court was given in favour of the Ram temple, giving a sense that the saffron brigade will not pursue with its earlier call of three temples, and instead use the Ayodhya verdict as a social balm to heal wounds on all sides, it is not inspiring confidence that the present issue will go uncontested.
There are already voices within the Sangh Parivar and the BJP that the “finding” of the shivling was a ‘historic’ turning point, and it would only accept a unilateral progress from here on, an encore of Ayodhya, which, in already stirred waters of Indian society, is deeply disturbing.

Since it is unlikely to expect political parties to forsake partisan gains and electoral windfalls, against the backdrop of more secular and mundane complaints of anti-incumbency — economy, unemployment, inflation, health and education — it is India’s big hope that the Supreme Court will ensure the judicial pillar of democracy is braced to live up to its highest expectation.

The verdict of yesterday, the first intervention of the highest court on the land on the matter, was sagacious, wise and humane; it was built on fairness and legal correctness, but also a heightened social awareness of the consequences, and established balance.

If the apex court continues to hold such high standards for itself throughout this case, however long that may be, India of the future would be grateful.