The Legislative Assembly, considered a temple of democracy, was defiled by the aggressive acts of DMK. 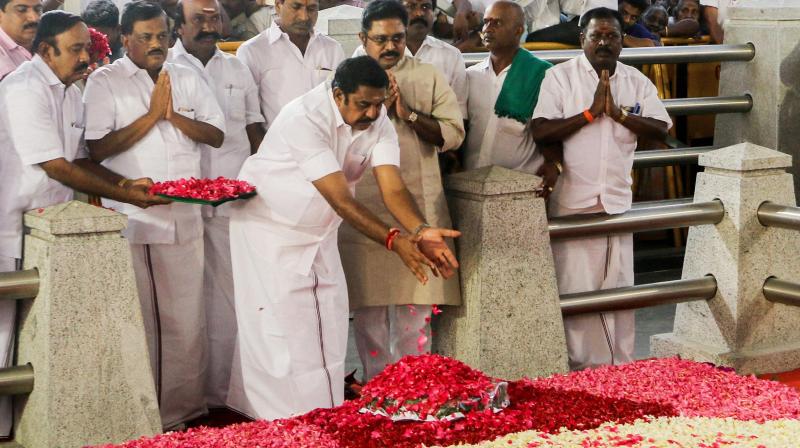 Democracy suffered one of its worst days in the Tamil Nadu Assembly after it was convened to allow new chief minister Edappadi Palanisami to seek a trust vote on the floor of the House. The Legislative Assembly, considered a temple of democracy, was defiled by the aggressive acts of DMK, the principal Opposition party, whose members pushed the Speaker around, threw paper and a waste paper basket at him, pulled his mike and sat in his chair to protest against his decision not to accept their demand for a secret ballot. The scene of a set of intransigent MLAs ranged against a Speaker who insisted on conducting the trust vote by a show of hands was distinctly one of déjà vu going back almost 30 years when Speaker P.H. Pandian behaved in a similar obdurate manner to ensure a vote of confidence in the chief minister he was backing.

The government of Edappadi Palanisami won a sort of trust vote by 122 to 11 with only the two factions of the AIADMK present in the House in the afternoon after 88 DMK MLAs were evicted by Assembly marshals, and the Congress MLAs and an IUML representative staged a walkout. The legitimacy of a verdict obtained in this manner is bound to be questioned in the courts although as of now the government of the day has prevailed and would be expected to get down to actual governance. The Speaker may have used his powers to refuse a secret ballot, but history is on his side as the previous 12 votes of confidence were by show of hands on the floor of the House and there are clear precedents in other state Assemblies.

Given the extraordinary circumstances of this trust vote towards which a set of more than 100 MLAs belonging to the Sasikala-inspired faction of AIADMK were sequestered in a resort near Chennai for days on end and considering the fact that one of the claimants to power is the former caretaker CM O. Panneerselvam, it would have seemed reasonable to hold a secret ballot to decide the crucial outcome. The Tamil Nadu Speaker, P. Dhanapal, may not be the first such “referee” of democracy to have taken a partisan decision to uphold a process that would suit the interests of his party or faction the most. It is a pity what such stances do to democratic norms.

The point is the opaqueness of Tamil Nadu in years under autocratic regimes is a well-established pattern in which crimes against democracy, of the violent and non-violent kind, are commonplace. What we witnessed is more such crimes of both varieties — the shameful physical acts of DMK and the partisanship of the Speaker for a faction determined to cling to power after the death of their popular leader two months ago — was the destruction of the reputation of democracy in a state which usually respected the highest traditions once the voice of the people had been heard in polls.