The turn for the worse can said to have begun last Wednesday when five CRPF jawans were killed along with state police personnel. 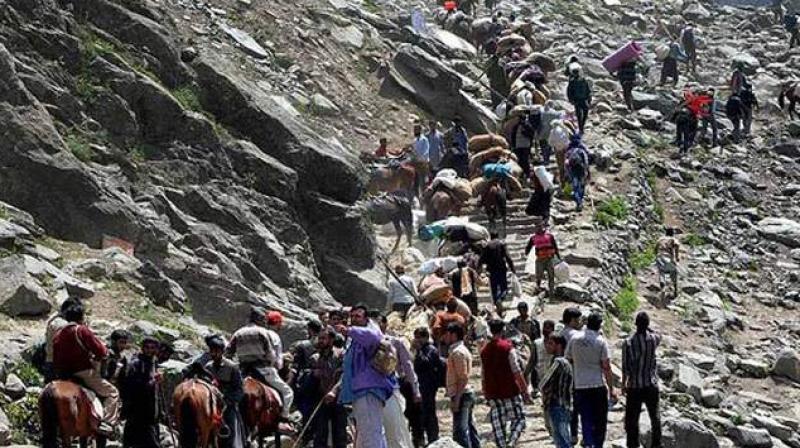 With the annual Amarnath yatra, which takes lakhs of pilgrims to the famous shrine in southern Kashmir, just a fortnight away, the authorities need to look sharp. (Photo: Representational/PTI)

The security picture in Kashmir appears far from satisfactory, and this cannot but tell on the political situation in the state. With the annual Amarnath yatra, which takes lakhs of pilgrims to the famous shrine in southern Kashmir, just a fortnight away, the authorities need to look sharp.

In the past week, there have been repeated terrorist strikes in southern Kashmir. The turn for the worse can said to have begun last Wednesday when five CRPF jawans were killed along with state police personnel. Stray terrorist attacks — which have been pretty much the norm for the past year or so — followed on subsequent days, with a spike two days ago on Monday, when three separate terrorist incidents took place. An Army major was killed in the Acchabal area of Anantnag district. There were two more strikes in Pulwama and Tral. A fresh attack was mounted by the terrorists on Tuesday morning as well.

If the period after the Balakote incursion into Pakistani territory by Indian Air Force jets was relatively quiet, going by the levels of violence in south Kashmir since July 2016, the past week should alert us to the reality that far more must be done to bring about a sense of near-normality in the Kashmir Valley. It remains to be seen if the Narendra Modi government in its second avatar sticks to its earlier formula of talking only through the gun.

The best scenario will be if the resolve of the security forces to deal with terrorism in Kashmir is maintained while a fresh start is made on the political side. This was the conspicuous missing factor in Kashmir in Mr Modi’s first term.

The so-called “Doval doctrine” — named after national security adviser Ajit Doval — was the Centre's mantra for the Valley. It allowed no real political engagement. With Amit Shah, the new Union home minister, enjoying the Prime Minister's fullest confidence, it will be watched with interest if a political element is introduced into the mix in dealing with the complex situation in J&K.

The first charge on the Centre — and of course governor Satya Pal Malik's administration — will be to take all precautions to ensure the safety of the Amarnath yatra. As per centuries-old tradition and the valley's cultural DNA, a Kashmiri Muslim (yes, even an extremist or terrorist) is most unlikely to attack the Amarnath pilgrims. But foreign terrorists are another matter.

The time may have come, while making security plans for the pilgrim route, to throw hints of the real possibility of holding the long-overdue Assembly elections in J&K at the end of the yatra period. This is likely to generate some goodwill for the government. An impression has got around — after a recent media interview of the governor — that state polls are off the menu now. Changing this impression could be helpful.