Let us end all violence in the name of protest. You don’t have a right to destroy another citizen, or their property 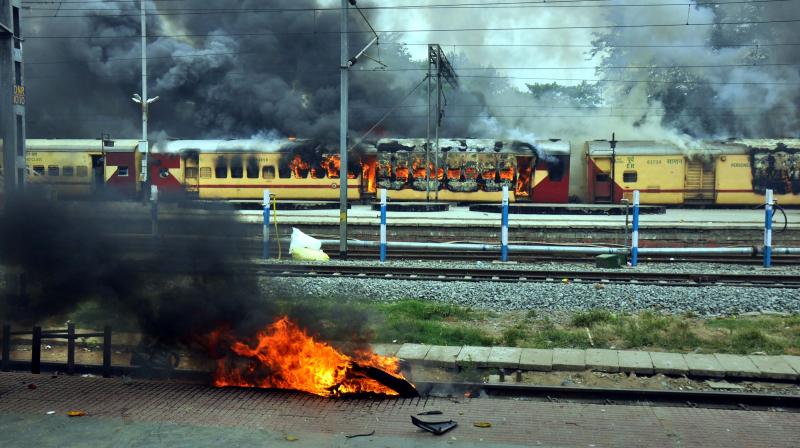 A train set on fire by a crowd in protest against the Centre's Agnipath scheme, at Danapur Railway station, near Patna, on Friday, 2022. (PTI Photo)

We are, tragically, becoming a republic of violence. Most civilised societies suffer from sporadic outbursts of collective and spontaneous acts of violence. Though shameful, these can be understood as exceptions, when no one tries to condone such actions, everyone rises to a level of fairness to condemn them and society takes steps to prevent their recurrence.

But a vicious cycle of organised violence in an environment marked by the deepening of political divide and a deficit of trust and mutual respect rising faster than inflation, fanned by hatred — communal and sectarian, is creating a nation held in a perpetual thrall of weaponised narratives and mass-manufactured outrages.

In imagining threats to our cherished beliefs, faiths and values, we have collectively become so gullible as to act like endangered beings, far too easy to provoke and retaliate, to boil and to burst.

In trying to protect ourselves from such easily imagined and amplified risks, we are blind enough to destroy the real and the existing — as a dark future a motivated polity prevails on us to be anxious about becomes our present state and by our own hand.

We have abandoned sanity and reason, moderation and reasonableness, calm and sangfroid and, above all, common decency and thus are responding to calls aimed deliberately at speaking to our untamed collective beast.

Farmers, students, jobless, women, minorities, majority, poor or powerful — everyone is ready to step out on the streets in a misguided belief that massive social change, a worthwhile social transformation and a metamorphosis in our national condition can be brought about merely by pelting the nearest target with stones.

There is abundant accumulated angst amongst the youth about jobs and their insecurities may be a good recipe for rage as it has been with religious minorities and farmers before; but as Indians we must try to remember a historic truth — we were born a modern nation, carved out of an ancient civilisation by a set of founding fathers who chiselled our ethos while faced up against one of the worst tyrannies of imperialism. During this time, it was democratic protest that came to be one of their most important tools.

The biggest problem with violence is not only that it is unsustainable or self-destructive, but that it takes away from us appreciating and putting to use the power of united, resilient, non-violent protest. It renders our anger impotent. How much can we burn? How much petrol there is, and what would we do when we can’t find any more stones?

The destruction of railway trains, the most innocent of mute, lifeless bystanders of all, should be condemned by those who oppose Agnipath or are the opponents of the Narendra Modi-led NDA government.

Let us end all violence in the name of protest. You don’t have a right to destroy another citizen, or their property. There can be no more commas in this saga of violent retaliation against the policies and rules of the present-day government; it must end with a full stop. Period.