The European Union has called an emergency virtual summit on Wednesday, as it explores how to help Belarus 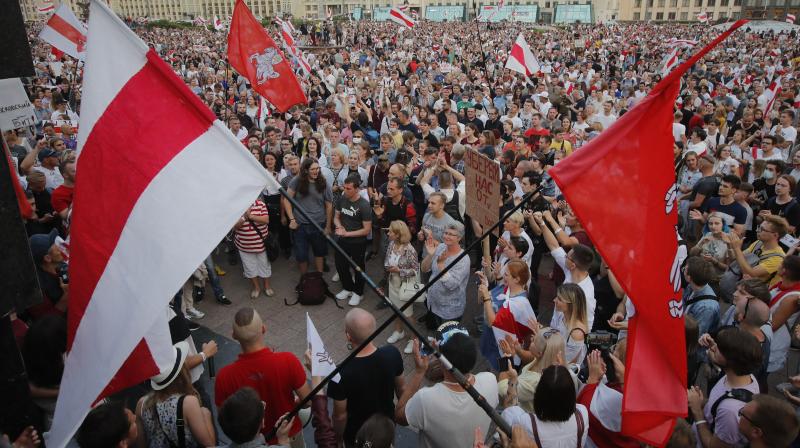 Belarusian opposition supporters gather for a protest rally in front of the government building at Independent Square in Minsk, Belarus. AP Photo

Over three decades after the Berlin Wall fell and the Soviet Union disintegrated shortly afterwards, Belarus’ embattled President Alexander Lukashenko, who ruled his country – once part of the Soviet empire – with an iron hand for over a quarter century, is being taught a lesson on the meaning of “people power”.

After claiming victory in the August 9 election, he faced nine days of continuous protests demanding he leave for rigging the results, with even some police and intelligence personnel deserting him.

Lukashenko, described by many as “Europe’s last dictator”, stood firm at the outset, but after open heckling by factory workers in Minsk on Monday, who demanded he “step down”, seemed to indicate he might be open to sharing power.

He suggested a referendum be held to change constitutional provisions so that a fresh election could take place, but this concession seems to have come too late, with the demonstrators demanding that he just go.

Sviatlana Tsikhanouskaya, the Opposition leader who fled into exile in neighbouring Lithuania two days after the election, claims that she won by a 60-70 per cent margin, and said she is ready to take over and lead the country, but Lukashenko vowed he won’t quit “under pressure”.

He even said: “Until you kill me, there will be no other elections.” One hopes he hasn’t forgotten the fate of Romania’s Nicolae Ceausescu and his wife Elena.
The embattled leader may have hoped Russia, Belarus’ powerful eastern neighbour, might come to his rescue and he spoke to President Vladimir Putin several times, but Moscow’s intervention seems unlikely.

President Putin promised help in case Belarus faces an external threat, but the threats Lukashenko faces are internal. There is little anti-Russian sentiment in Belarus, and most people speak Russian, so rather than prop up the unpopular President, Putin might try to “manage” the transition.

An invasion, like in Ukraine some years ago, would also trigger fresh Western sanctions, something Russia might wish to avoid. The European Union has called an emergency virtual summit on Wednesday, as it explores how to help Belarus in its hour of need.