Mexicans may hope the Great Wall of Trump doesn’t come up, and they can continue to sneak across the border after January 20. 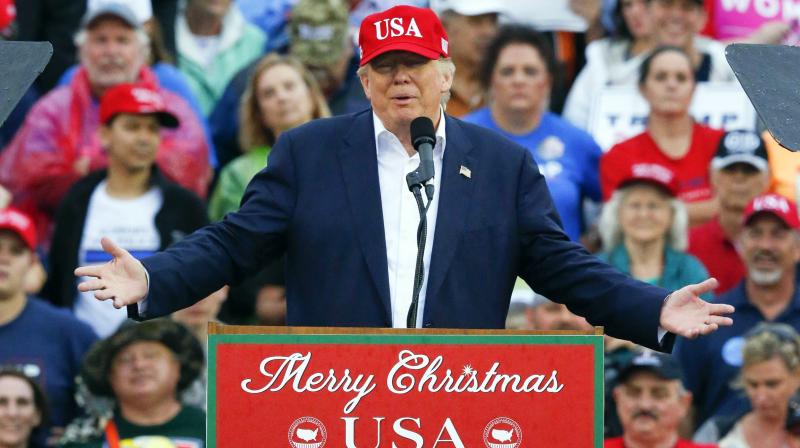 President-elect Donald Trump speaks during a rally at the Ladd–Peebles Stadium. (Photo: AP)

Gaffe-prone Donald Trump has done it again; perhaps exceeding himself in an “unpresidented” manner. Given that his election as US President hasn’t been universally popular, there may be some praying for an unprecedented event by which the elected candidate doesn’t make it to the White House. Cruel as that sounds, Mexicans may hope the Great Wall of Trump doesn’t come up, and they can continue to sneak across the border after January 20.

The latest gaffe may be from the shaky trigger finger of the “Twitterest” President ever, and a quick correction in an amended tweet may have set it right. Mr Trump, after all, wasn’t elected for his prowess at spelling bee contests, in which any bright Indian-American kid would laugh his head off if tested with that adjective. Mr Trump will “make America great again”, a resounding vow that goes way beyond spelling mistakes.

All politicians were prone to gaffes in the sensational 2016 campaign. What made Mr Trump stand out was that his outlandish remarks did not remain off-script for long. There is a suspicion that his gaffes were indeed his script. Take his engaging comment when cornered on same-sex marriage and how he was opposing it because he was a traditionalist in matrimonial matters. When a reporter asked what exactly was traditional in marrying three times, Mr Trump responded with: “That’s a good point.” Also, in time, he may even learn to differentiate between Hindus and Indians. It may now suffice to observe that interesting times lie ahead.