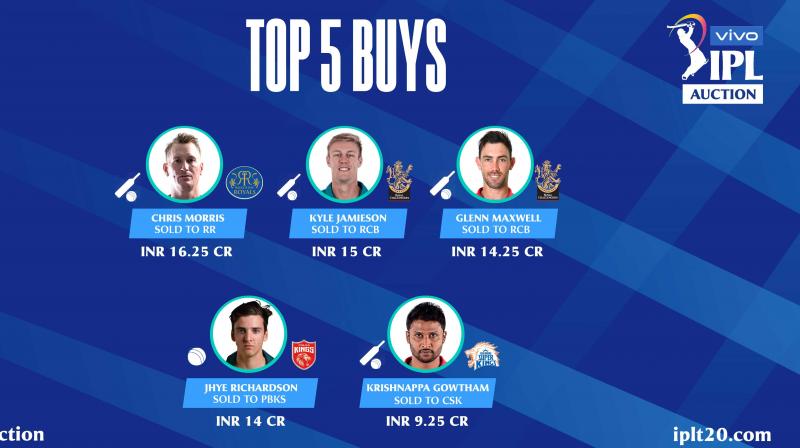 The riches showered on some youngsters in this annual auction like K. Gowtham, bought by Chennai Super Kings for US $9.25 crores and M.Shahrukh Khan, picked up by the renamed Punjab Kings for Rs 1.2 crores. (Image credit : Twitter/@IPL)

A couple of IPL teams seem to have gone overboard in splashing crores on cricketers who are looking to rediscover their mojo after very poor outings in the last edition of the league played in the UAE. Considering that 130 countries around the globe are yet to lay their hands on vaccine supply in the face of the coronavirus pandemic, such splurging seems a tad extravagant. But then chasing sporting success is an expensive but far from scientific pursuit. Perhaps, the extravagance has to be seen as part of a larger sport bubble that comes more as an entertainment package and is not to be equated with normal pay for work rewards in common men’s lives and livelihoods. The 2020 records of Chris Morris of South Africa, who at Rs 16.25 crore has become the cash-rich league’s most expensive player at an auction and Glenn Maxwell of Australia who gets close to US $2 million (the approximate procurement cost of 5.7 lakh vaccines) bear no relation to the prince’s ransom being paid as salaries.

The teams seemed so overenthusiastic about foreign T20 all-rounders that they could not show the same largesse to homegrown talent. The riches showered on some youngsters in this annual auction like K. Gowtham, bought by Chennai Super Kings for US $9.25 crores and M.Shahrukh Khan, picked up by the renamed Punjab Kings for Rs 1.2 crores, may have been heartwarming as their potential to shine in the T20 format is being recognised. The champions Mumbai Indians, who were parsimonious compared to the likes of Royal Challengers, Bangalore who broke their bank at the auction on a couple of expensive buys, also chose to take on the cricketer with the famous surname — Arjun Tendulkar — at the modest starting price of Rs 20 lakh. In cricketing terms, the hunt for impact players who can be expected to swing games with bat and/or ball seemed logical enough. The timing of the commitment of millions seems a bit awkward when the world is vaccinating against the existential crisis posed by the virus.