Instead of supporting the economy when it needed the most, Ms Sitharaman focused on medium and long term reforms 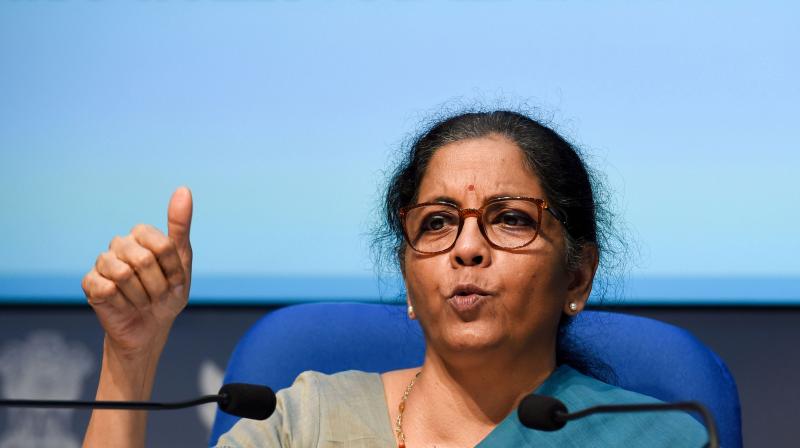 Though Prime Minister Narendra Modi has grandly announced about Rs 20 lakh crores worth stimulus package to support a wavering economy, the analysis of announcements made finance minister Nirmala Sitharaman showed that it was a mere jugglery to hog the limelight. PTI Photo

Exactly 90 years ago, India and also the rest of the world was brought to their knees by the Great Depression of the 1930s. It was marked by a sudden fall in prices, a crash of demand and also a shortage of money with people. Now, the world is witnessing a similar phenomenon, albeit caused by humankind locking itself at home to keep away the highly infectious coronavirus.

In fact, according to US-based investment bank Goldman Sachs, the Indian economy is expected to contract nearly 45 per cent in the first quarter — which is worse than the economic mayhem witnessed in the 1930s in India. It expects a washout of the financial year 2020-21, with the size of Indian economy shrinking by five per cent — a loss of $160 billion (Rs 12 lakh crore) worth output by a conservative estimate. The economic devastation caused by the 2020 coronavirus shock in India could be greater and much widespread because a significantly larger population of the country is dependent on formal economic activity than that of 1930s India. The government was the only entity that had the wherewithal to backstop the impact.

When the lockdown was announced, its impact was anticipated by everybody who had the basic knowledge of economics. We were the first to call upon the Narendra Modi government to loosen its purse strings to prevent the crash of demand or depression and to provide sovereign-backed working capital loans to micro, small and medium enterprises (MSMEs). While the small businesses were given a lifeline, the government has ignored suggestions to put cash in the hands of people to sustain demand in the economy.

Though Prime Minister Narendra Modi has grandly announced about Rs 20 lakh crores worth stimulus package to support a wavering economy, the analysis of announcements made finance minister Nirmala Sitharaman showed that it was a mere jugglery to hog the limelight and divert attention from fast-rising coronavirus cases. Instead of supporting the economy when it needed the most, Ms Sitharaman focused on medium and long term reforms. To support her policy, she reiterated Mr Modi’s oft-quoted statement that it is better to teach a person how to fish rather than give him the fish. However, one wonders how learning fishing would help a person who is going to die of hunger! For such a person, giving the fish is the only solution.

In 1930, when the cash crops of Indian farmers found no buyer because of the Great Depression, lakhs of farmers were on the verge of starvation and had no cash. But the viceroy of the day, Lord Willington, refused to provide any government support or stimulus to the country’s economy and let Indians sell their family gold to sail out of the crisis. One of the after-effects of this policy was Salt Satyagraha and the intensification of the Indian freedom struggle. One could understand the indifference showed by Willington to the plight of Indians, but it is difficult to fathom the same shown by the Modi government. History is taught to help the current generation to avoid mistakes committed by those in the past. If we don’t take lessons from history, the same fate would await us as it did our forefathers.