After J&K was reduced to a Union Territory last August, the government has been on the rampage, piling up human rights violations 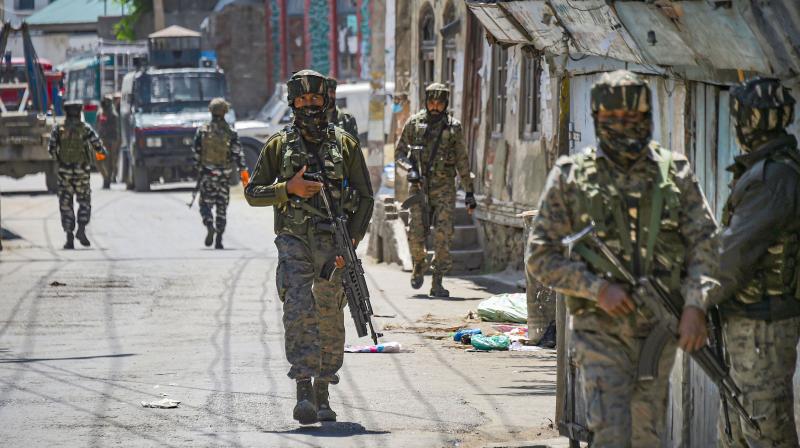 Two militants of the Hizbul Mujahideen, for all practical purposes the only home-grown armed extremist outfit in the valley, who had engaged the security forces were brought down and five jawans injured. AFP photo

If we don’t take the right lessons from history, we are condemned to repeat it. The saying comes to mind when we weigh the self-congratulatory tone in the statement of J&K DGP Dilbagh Singh after the night-long encounter in a crowded locality of Nawakadal in the old city area of Srinagar ended on Tuesday.

Two militants of the Hizbul Mujahideen, for all practical purposes the only home-grown armed extremist outfit in the valley, who had engaged the security forces were brought down and five jawans injured, one of them seriously. In his wisdom the police chief called the event a “major success”. He didn’t explain why.

Nor did he assert the belief that the way the Nawakadal encounter ended showed that militancy in the Valley was petering out. Then it’s hard to say where he is coming from, except to note that phrases like “major success” have become the stock-in-trade of the security forces, and that this particular top cop is prolix.

At the end of the day, two young men who had become armed combatants against the state, were killed. One of them had vanished from home barely two months ago and emerged as a “divisional commander”, a puerile term of self-glorification militants employ.

The militancy in Kashmir rests on the shoulders of ill-trained, ill-equipped but committed youngsters, a great many of them barely out of their teens. Even so, it is remarkable that the thousands of our security forces haven’t got a handle on them after all these years. This goes to show the phenomenon may be on its way to becoming deep-rooted, and growing with every perceived slight.

Especially after J&K was reduced to a Union Territory last August, the government has been on the rampage, achieving little but piling up human rights violations and distortions. Consequently, people have turned much angrier. Photographs show many structures around the site of the Nawakadal gunfight burning, and youngsters throwing stones at the forces. This is the result of the policy of not talking to the people, just shooting at them.