India’s relationship with South Asian countries is largely an unequal one, and it’s really up to the bigger country to reach out 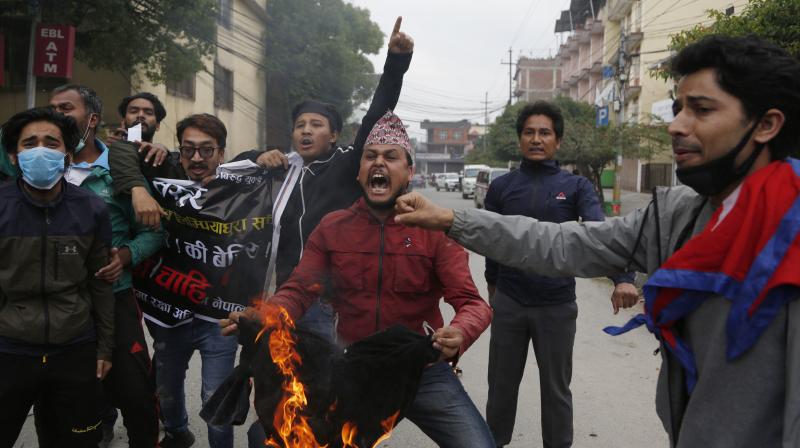 In this Monday, May 11, 2020, file photo, Nepalese students shout slogans during a protest against the Indian government inaugurating a new road through a disputed territory between India and Nepal, in Kathmandu, Nepal

A combination of factors, including perceived slights by New Delhi as well as domestic political infighting, could be behind Kathmandu’s surprising move on Wednesday to release a new official map showing Lipulekh and Kalapani in Uttarakhand as part of its territory, which India was quick to reject as unacceptable, saying “this unilateral act is not based on historical facts and evidence”. Tensions were simmering since defence minister Rajnath Singh inaugurated a 80-km road linking Dharchula to Lipulekh Pass, that would reduce the Kailash Mansarovar pilgrimage time, earlier this month. In addition, Nepal PM K.P. Sharma Oli also indulged in needlessly provoking India, saying people coming from India illegally were spreading the virus and the “Indian virus looks more lethal than the Chinese or Italian…” Speaking in his parliament, he also insulted India’s national motto, “Satyameva Jayate”, wondering if it should instead be “Simhaeva Jayate” (the lion’s might triumphs).

So, what’s behind all this? India-Nepal ties, extremely close for decades, especially given the open border, were frayed for the past few years, more so after the 2015-16 economic blockade, which many in Nepal haven’t forgotten. Kathmandu was one of the first places Narendra Modi visited after becoming PM in 2014, but his government has not been particularly effective in winning hearts and minds in the neighbourhood. India’s relationship with South Asian countries is largely an unequal one, and it’s really up to the bigger country to reach out. In addition, Nepal has transformed in the past decade, and is a republic, but there are many in Delhi’s ruling establishment who yearn for the days of what was the world’s only Hindu kingdom.

Now add the China factor. Army Chief Gen. M.M. Naravane had hinted Beijing was instigating Nepal to needle India. The Chinese ambassador recently intervened in a power struggle in Nepal’s ruling Communist Party to rescue Mr Oli from a destabilisation attempt by two former PMs, Prachanda and Madhav Nepal, and now Mr Oli has tried to play the anti-India card to compel them to support him politically. A meeting of the two foreign secretaries will be held once the Covid-19 crisis ebbs: one only hopes they can de-escalate the “cartographic war”.