The truth is either Telangana, nor any other Indian state, can afford to have a confrontation with Union government at this point of time 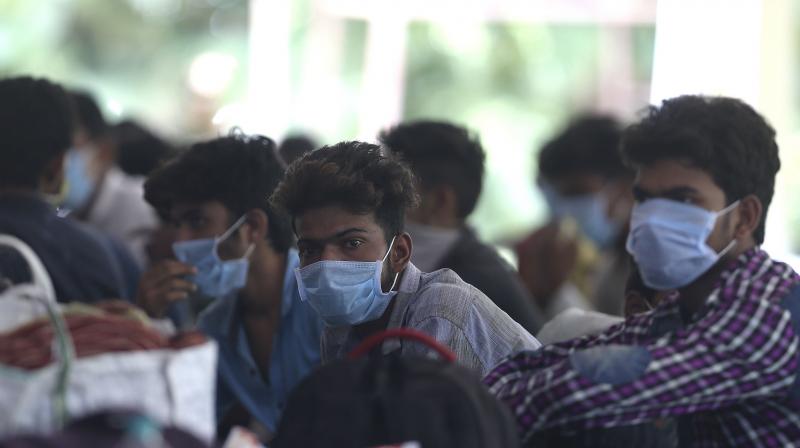 Migrant workers waits at a temporary shelter to register for free travel on a train, during lockdown to prevent the spread of new coronavirus on the outskirts of Hyderabad. AP Photo

The intractableness of chief minister of Telangana K. Chandrashekar Rao has created a minor impasse between the Central government and the state over the issue of the scope and extent of sample testing of coronavirus suspects in the fight against the pandemic.

The recalcitrance of Mr Rao’s government has pushed the Centre to post an advisory, with Union health secretary Preeti Sudan writing an exceptive letter to Telangana chief secretary Somesh Kumar over the “lack of proactive testing” by the state.

The choleric CM is not disposed to advice, which reflected in the callous and cavil response of state health minister Etala Rajender to the Central advisory and all criticism on this front, in a dismissive manner amount to say that the state policy of under-testing was in compliance with ICMR guidelines and therefore, well within its prerogative to take a call as it deems fit.

The Telangana view is not totally unfounded because different states have chosen to approach the issue differently, whereas Tamil Nadu (2.8 lakh), Maharashtra (2.3 lakh) and Andhra Pradesh (2.1 lakh) have tested more people, Kerala (40,000) and Telangana (23,000) have been testing on the lower side.

Proactive or wide-spectrum testing may not be the only way to fight Covid. It needs a balance between effective lockdown, optimal awareness creation on precautions, managing contacts and efficient quarantine of returnees in different stages to manage.

However, testing low is not a virtue either. Telangana, for instance, has an over six percentage of positive conversions to testing, whereas in Kerala it is a barely 1.4 per cent. This alone should, in the interest of knowing the extent of cases and managing them better, have prompted Telangana to change its policy and approach, and shift to proactive and extensive testing.

Instead, the state is pushing itself in a chimerical race to the bottom, hoping when the coronavirus pandemic is over, it can claim political victory for the TRS party and Mr Chandrashekar Rao for having had the least number of cases, and deaths.

A secondary objective is to protect “Brand Hyderabad” for the post-Covid industry and investment exodus from China, which is why the TRS government has pushed the Greater Hyderabad Municipal Corporation (“GHMC” area) instead of Hyderabad as the entity where cases are being located, identified, treated, et al.

The truth is either Telangana, nor any other Indian state, can afford to have a confrontation with the Union government at this point of time. It is neither time, situation nor wise to precipitate a Centre-state crisis and snowball an exchange of words over a near naught of an issue.

Truth is Telangana being caught by the Centre under-testing, under-reporting and trying to paint a picture better than the reality is akin to a child caught with his hand in the cookie jar. Instead of making it a full blown controversy, let the state cease being gingerly with truth, shift to rapid and extensive testing, report cases and deaths transparently. This is not a race to win, but an emergency where lives are on line which must be saved. Prioritise lives over ranks.