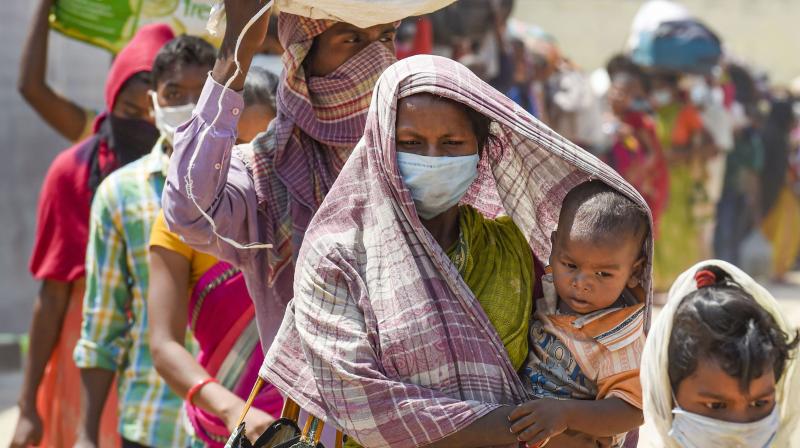 Migrant workers wait in a queue while being lodged at a camp by the Uttar Pradesh government, during ongoing COVID-19 lockdown, at Dadri. PTI Photo

If one sight that burns the hearts of people all over the world in the backdrop of the pandemic Covid-19, it is that of the lakhs of unorganised sector workers walking home across India. The packages offered by the Union and various state governments have not been able to persuade them to stay back where they are, mostly in the cities, and wait for the economy to pick up so that they can go back to work. Some of them have their families, including small children, with them; even pregnant women have little option but to walk. They have scant idea about their future but would like to be back home since uncertainty has surrounded their lives. Several of them started walking immediately after the government announced the national lockdown on March 24 and the government, almost a month later, arranged Shramik trains for their transportation. However, the train availability was too sparse, and offered little relief. They continued to walk.

It is this background that we must see what is happening in Uttar Pradesh. All India Congress Committee general secretary Priyanka Gandhi Vadra made an offer earlier this week to make 1,000 buses available to the government of Uttar Pradesh to ferry guest workers to their destinations. The state government reacted positively, asking the Congress leadership to furnish details of the vehicles and the men who will run it. If those who thought that at least some of the hapless walkers would get some relief, they were in for a rude shock on Tuesday when the police booked the Uttar Pradesh Congress Committee president Ajay Kumar Lallu and Ms Vadra’s secretary Sandeep Singh for charges that ranged from cheating to giving false information to the government on the vehicles. As per reports, only 879 vehicles were buses instead of the promised 1,000; the rest comprised schoolbuses, trucks, pick-up vans and some three-wheelers. Some reportedly had no fitness certificate while some others had legal hurdles to run in Uttar Pradesh. The police did not stop at registering the cases; it went on to arrest Mr Lallu on Wednesday, who was later released on bail. He was arrested again on the same day for organising a demonstration demanding that the buses be allowed to ply. The government refused to budge and the buses had to return.

All right-thinking citizens would wonder what weird logic the dispensation in Uttar Pradesh follows and whether the netas in power there are to serve the people or to settle cheap political scores. The government booking people who came forward to help suffering fellow mortals on flimsy grounds betrays its fear of being exposed for its inability to act in time to bring succour to the needy. This is unheard of in India, and strikes at the very root of democratic norms. The Yogi Adityanath government must withdraw the cases against the Congress leaders, work with the Opposition and ensure that the guest workers are given a better fare. If human tragedies do not move rulers, they have little right to be in the seat of power.