After AIADMK merger, some problems remain

The AIADMK’s internal contradictions are going to be its greatest enemy. 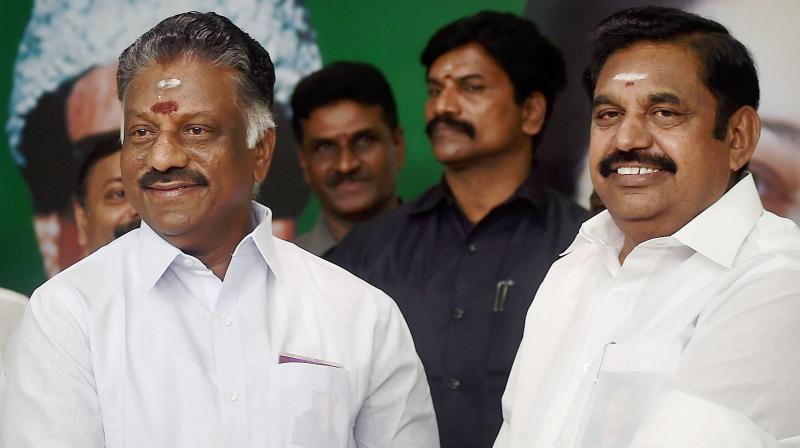 All’s well that ends well! This may well be the lesson the AIADMK, Tamil Nadu’s ruling party, may draw from Monday’s merger of chief minister Edappadi K.. Palaniswami’s group with the few rebel MLAs of former CM O. Panneerselvam’s faction. However, the merger is just a new beginning for a party that has been drifting listlessly following the death of its charismatic leader J. Jayalalithaa last year. With the support of around 133 MLAs in a House of 234 members, the government should, in theory, be more stable than it was in the past six months with a wafer-thin majority. It remains to be seen if stability can indeed be found or whether the few MLAs still owing allegiance to Jaya’s controversial confidante V.K. Saiskala and her nephew T.T.V. Dhinakaran may be spurred to bring down the party’s government.

The AIADMK’s internal contradictions are going to be its greatest enemy. There were two clear factions before the merger. Post-unity, two factions still remain as Dhinkaran is now holding the rump elements together in a bond of loyalty to the older Poes Garden regime, which could not go forward with Sasikala as CM as she is jailed for graft under the Prevention of Corruption Act. The nephew and his aunt don’t enjoy the masses’ support, but they can manipulate legislators who owe personal allegiance to them. Sasikala’s planned formal ouster from the party — one of two major conditions laid down by OPS for the merger — had to be postponed as some of her loyalist ministers opposed the eviction, which can be done only by the AIADMK’s general council under the party’s constitution.

The key party leaders are determined to strike out a course of their own although their merger was inspired by the Centre and personally by Prime Minister Narendra Modi, and the deal was brokered by a BJP ideologue. On the face of it, a New Delhi-friendly government at Fort St. George should help Tamil Nadu rediscover the facets that made it one of India’s better administered industrial states. But a greater danger lurks in the caste factor that could surface once again. The state is being ruled for a while by a representative of a dominant caste of western Tamil Nadu, whereas OPS represents another dominant caste to which Sasikala also belongs. Any issues among the top leaders could be sorted to keep the regime going. Even then, Dhinakaran remains the major internal threat to the good intentions of many to keep the party of MGR and Jayalalithaa together in the face of the ambitions of the second generation of the other major Dravidian party, the DMK, led virtually by the son of ageing patriarch M. Karunanidhi.