AA Edit | 3-dose jab a breather for govt, hope for the young

The needle-free vaccine has shown an efficacy of 66.6 per cent in a late-stage trial of over 28,000 volunteers nationwide 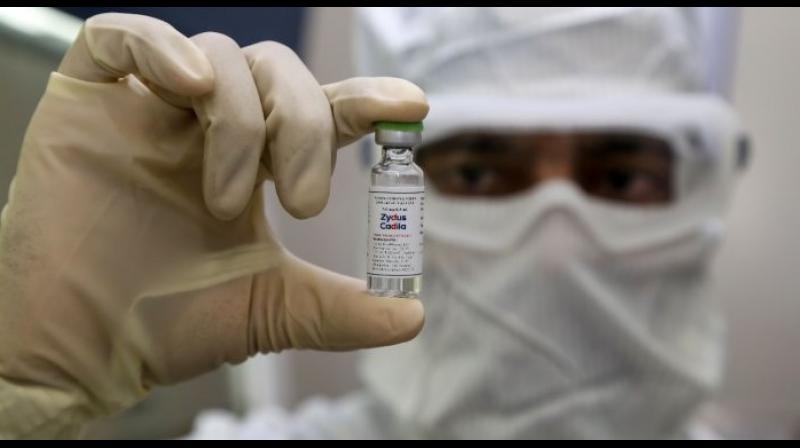 The manufacturers plan to make one crore doses a month and will make available five crore doses by the year-end. (Twitter)

The Drugs Controller-General of India’s decision last week to grant emergency use authorisation to Zydus Cadilla’s three-shot vaccine for application in adults and children aged 12 years and above is a significant milestone India has crossed in the fight against pandemic Covid-19. The vaccine, christened ZyCoV-D, developed with the help of department of biotechnology of the Union government, is the second indigenously made vaccine after Covaxin of Bharat Biotech International Limited and will join the other five that have been authorised for use in the country. The needle-free vaccine has shown an efficacy of 66.6 per cent in a late-stage trial of over 28,000 volunteers nationwide, and is claimed to be effective against the Delta variant as well.

The world’s first plasmid DNA vaccine uses genetic material from the virus that instructs as either DNA or RNA to make the specific protein that the immune system recognises. It will be administered with the help of an applicator instead of traditional syringes. It will be available in small quantities in September while the larger rollout is expected in the middle of October. The manufacturers plan to make one crore doses a month and will make available five crore doses by the year-end. The company is on record saying it will next apply for Covid-19 vaccine trials in children aged between three and 12 years.

The development of the first vaccine for children aged between 12 and 18 will be a gamechanger in that it will help the government and authorities plan for the future in a better manner, especially on the question of opening up schools and colleges. The closure of educational institutions for the last one-and-a-half years has created unprecedented complications, academic and otherwise. Classes are being conducted online but the huge digital gap that exists in the country now has been further accentuated. Lack of gadgets coupled with impossible monitoring has created a system that is skewed beyond acceptable limits. Several state governments have realised this and yielded to the pressure of experts and parents to open schools, at least partially.

The younger lot has been falling prey to the Delta variant across the world, especially in the United States. Experts predict that the next wave in India will hit children the most. It is true that the government has of late been focussing on creating healthcare infrastructure to take care of children but it will be too little if the virus will have a similar run as it has had in the US. We cannot afford to let them take the hit.

The new vaccine will help the government address these issues. It must now form a universal vaccination policy for the children, instead of leaving it to the states and the private sector, as it did during the second wave of the pandemic. Estimates say the target group will be anywhere between 15 and 20 crores. The budget has already allocated money for vaccination and promised to do more in case of need. The government must walk the talk, and ensure that every child gets the jab free of cost. Let’s do justice at least to them.