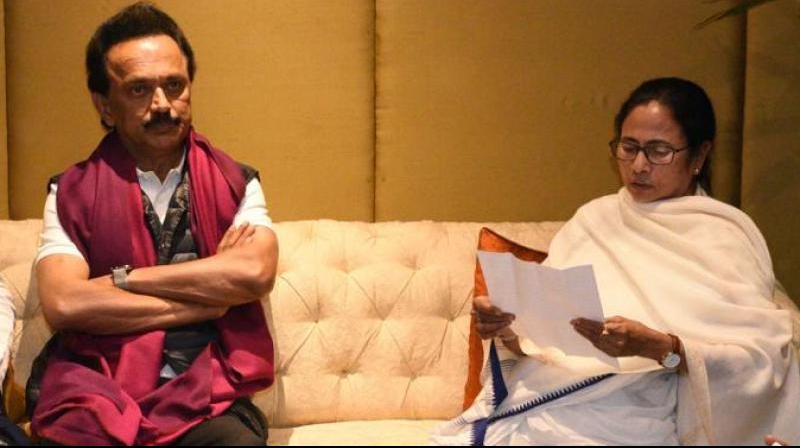 What’s likely to impart energy on the ground to an Opposition line-up is the presence of prominent non-Congress chief ministers at the discussion. Representational Image. (Twitter)

It is noteworthy that the 19 political parties that attended the virtual meeting last Friday at the call of Congress president Sonia Gandhi did so at the top leadership level, which was not the case with similar meetings called earlier by prominent Congress leader Rahul Gandhi.

What’s likely to impart energy on the ground to an Opposition line-up is the presence of prominent non-Congress chief ministers at the discussion. This included leaders whose parties have roundly defeated the BJP and its allies at the hustings very recently — Mamata Banerjee and M.K. Stalin — as well as Uddhav Thackerary, whose committed manoeuvres humbled the BJP in Maharashtra less than two years ago. Political stalwart Sharad Pawar was present too.

Building on Ms Gandhi’s pithy statement that there was “simply no alternative” before the opponents of BJP but to work “cohesively together”, the forum took the unity-in-action route. It called for a 10-day protest in the country in the last 10 days of September. Joint protests have proved a good mobilising tool for decades if the demands being raised connect with the people. Whether they do so or not will depend on the manner of projecting issues by popular leaders.

That test is yet to be gone through. And it will not be a mean test since the man on the other side, PM Narendra Modi, has taken on all comers at the national level in two consecutive Lok Sabha polls. His party is also flush with funds, thanks to electoral bonds about which even the Election Commission has raised an eyebrow. The government controls the coercive power of the state apparatus through the indiscriminate use of various agencies to intimidate opponents, with the top judiciary being a helpless observer frequently.

And beyond all this is the communal agenda propagated by various so-called social and cultural platforms associated with the BJP. This can be a sympathy-gathering factor for the ruling party.

The top-level nature of the meeting notwithstanding, it is noteworthy that this is not a case of all-in unity. The non-BJP parties of several states which are seen as not hostile to BJP at the national level have stayed out. Ms Mamata Banerjee has suggested their inclusion. It is not clear whether such parties are willing to join, or whether coordinating with them will enhance the Opposition effort. This is an imponderable at the present stage.