If Bihar is to get the Covid vaccine free, will other states also get it free? Has the cost of this been calculated? 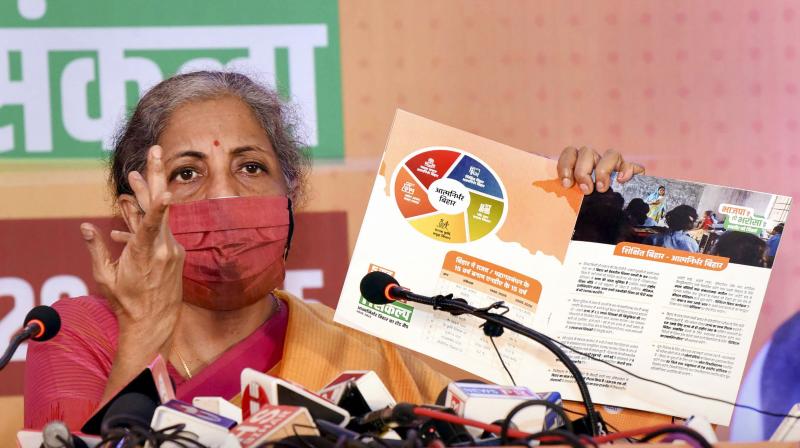 The announcement of Union finance minister Nirmala Sitharaman on the Assembly election campaign trail in Bihar on Thursday that the BJP would offer free anti-Covid vaccines to everyone in Bihar is apt to be seen as a con by the people of the state. This is because it is widely understood that the timelines for the arrival of a safe, effective, efficacious vaccine are fuzzy and confusing.

Top labs and top scientists in the world have made contradictory observations on this matter, although some governments, including our own, have chosen the seemingly reassuring way and hinted that we should have the cure in the bag early next year. Here too the basis is purely political, with not a shred of science attaching to it.

The government strategy is clearly to spread a ‘feel-good’ sentiment. The underlying message is that the government is in control, and that we are in trustworthy hands. Sitharaman’s statement appear to attempt to further that strategy, except that she was speaking on an election platform and unveiling her party’s election manifesto for the state poll, where free vaccine is point one on the agenda.

There are hosts of problems with such an announcement, especially when it comes from the country’s finance minister. Her wearing of the party hat is not relevant here. What’s noteworthy is that only the ruling party could have made such a statement, and not its opponents. The Election Commission will therefore be called upon to see if this is a violation of the principle of each party being offered a level playing field. This is as far as elections go, but other questions also arise.

If Bihar is to get the Covid vaccine free, will other states also get it free? Has the cost of this been calculated? If the zero-price favour is only for the state going to the polls, then it is clearly a bribe — a case of the use of political power to influence an election in which the ruling coalition’s prospects look less promising than previously. More, there is also the question of all states having equal status in the eyes of the Centre.

If cynical opportunism is what the BJP is playing at in order to defend its electoral position in Bihar, then Bihar can ask about the promise of a “special package” that has been spoken of ad nauseam by chief minister Nitish Kumar for more than a decade.

On the coronavirus front, Prime Minister Narendra Modi had pointed the right way recently when he said that in the distribution of the vaccine the country will have to take the right lessons from the planning of logistics in the process of holding national elections or coping with natural calamities. This would need a national-level conceptualisation and distribution effort. Those at the frontlines of risk, such as health workers, will have to be prioritised, followed by those placed high under a hierarchical gradation of vulnerability, for example elderly people with co-morbidities. The BJP’s announcement in Bihar mocks such planning and places narrow politics above the nation.