AA Edit | Is Tharoor a problem for Cong?

Mr Tharoor possesses qualities that are sellable among the aspirational middle class Keralites, too 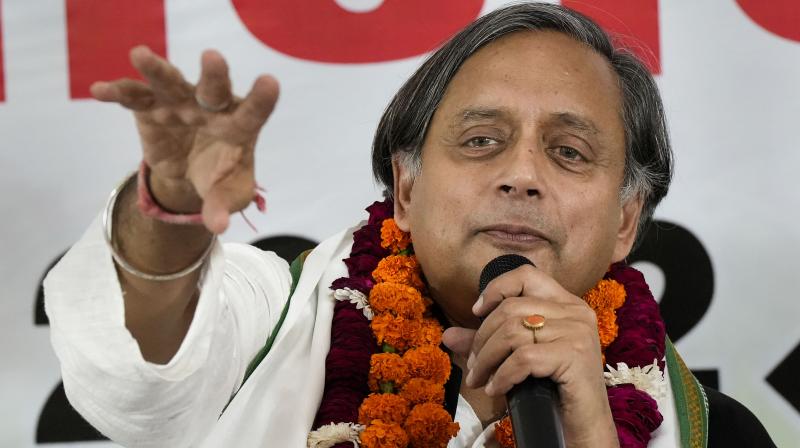 Mr Tharoor’s steadfast assertions of his commitment to the Nehruvian principles of economics and secular politics would naturally be endearing to those sections. (Photo: PTI)

The discomfiture of the Congress leadership towards Shashi Tharoor who contested in the party’s presidential election and made it a democratic process has permeated from the national level to the state level with the Kerala unit keeping a distance from the third time MP from there. The party displayed a hostile attitude to Mr Tharoor’s largely successful tour of the northern part of Kerala where he was received with enthusiasm by party workers as well as leaders of the constituents of the party-led United Democratic Front, including the Muslim League.

The largest contingent of the Congress in the Lok Sabha comes from Kerala and hence the party unit in the state has more responsibility than others to be realistic about the ground realities. The LDF which was made to bite the dust in the 2019 Lok Sabha elections winning only one of the 20 seats romped home in the elections to the state Assembly held two years later with 99 out of the 140 seats. And in the process, unlike in most other states, the vote share of the BJP went down by 20 per cent; it even lost the single seat it had won in the 2016 elections.

This was a clear indication that secular formations with a plan for governance get the support of the people of Kerala. It is a fact that the utterances of the KPCC president whose single point agenda of attacking the CPI(M)-led Left Democratic Front and his equivocal approach towards the right wing politics have created consternation among the traditional vote bank of the party and the UDF. Mr Tharoor’s steadfast assertions of his commitment to the Nehruvian principles of economics and secular politics would naturally be endearing to those sections. Mr Tharoor possesses qualities that are sellable among the aspirational middle class Keralites, too. The options before the Congress, hence, are obvious: either accommodate Mr Tharoor and make it a win-win situation or attempt to neutralise him in a zero sum game.